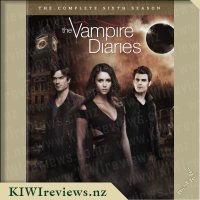 Disclosure StatementFULL DISCLOSURE: A number of units of this product have, at some time, been supplied to KIWIreviews by Roadshow (NZ) Ltd or their agents for the purposes of unbiased, independent reviews. No fee was accepted by KIWIreviews or the reviewers themselves - these are genuine, unpaid consumer reviews.
Available:
September 2015

Season five began with a sense of hope for Elena. After a passionate summer with Damon, Elena headed to Whitmore College with Caroline, not knowing that Bonnie sacrificed her life to save Jeremy. As Bonnie's friends fought to bring her back to life as the Anchor to the Other Side, Stefan had to face off with his doppelganger Silas, and a newly human Katherine struggled with mortality and motherhood. Damon's relationship with Elena was put to the test when Enzo, an old vampire friend from Damon's past, revealed he was still alive and looking for revenge. Stefan and Caroline's friendship deepened as they stood up to the Travelers, a nomadic witch tribe driven to strip Mystic Falls of magic and cast out its supernatural residents.

Damon, having lost his town and fearing that he would lose his loved ones on the crumbling Other Side, made a huge sacrifice to bring them all back - with catastrophic results. While the cliffhanger season finale sent our characters reeling, season six will be the story of their journey back to each other as they explore the duality of good versus evil inside themselves on their quest to reclaim their home. Matt Davis rejoins the cast as a series regular this season, reprising his role as Alaric Saltzman, recently returned from The Other Side.

I have to be honest and say that I am not the biggest TV watcher, I tend to have 4 or 5 shows that I like to watch and that's about it, and when it comes to The Vampire Diaries that's the show right at the top of my list. When I saw the complete sixth season come up for review I jumped at the chance to review it as I had only managed to watch 3 or 4 episodes sadly so was completely behind in the going on's of the show, luckily this set of DVD's had me up to speed in no time at all! The complete sixth season consists of 5 discs and also comes with some special features which were pretty cool to watch and that if watching on TV you wouldn't get to see, including some un-aired scenes.

At the end of season five it was all looking promising for Elena as both she and Caroline both headed off to study at Whitmore College, but in true Vampire Diaries style this quickly took a back turn with them both having to return to Mystic Falls. Damon ended up on the other side and everyone was in hope that Bonnie would have a way to bring him back as she really was the last chance they had but sadly this was not the case. Near the end of the season Enzo, a friend from Damon's past (who is also a Vampire) showed up looking for revenge, as a lot of vampires seem to be after when it comes to dealing with the Salvatore brothers (particularly Damon) this put his relationship with Elena on the line and really tested out the love which they had for one another, while their relationship was on the line, the relationship between Stefan and Caroline however seemed to grow stronger and stronger as the 2 worked together to fight against a nomadic witch tribe which happened to show up to get rid of all things magic and supernatural.

In the sixth season of Vampire diaries Elena really struggles to move on without Damon and seeks help from Alaric to help her do so. Kai ends up casting a spell on Elena which linked her and Bonnie together, so for Elena to wake up anytime soon sadly meant that Bonnie would have to die. With Damon so madly in love with Elena even after his return from the other side he had to make the ultimate sacrifice of choosing who to save Elena or Bonnie, in the end surprisingly enough he made the right choice and decided not to murder his best friend and to let the most loved person of his life sleep for the next five decades, a hard choice on Damon's behalf. After this difficult decision we saw the friends and remaining family of Elena Gilbert gather around to say their good-bye's to her which I must admit was a bit of a tear-jerker especially, when her brother Jeremy just so happened to turn up.

Alaric and Jo set to get marry, which for most you'd expect to be a happy occasion, but this was never to be the case on the Vampire Diaries. I have to admit it seemed like a disaster waiting to happen from the start with Jo's shoes missing and her wedding co-ordinator falling sick, but Caroline happened to show up in the nick of time and save the day, or so we thought! As the happy couple began to say their vows which they had written, and Alaric gives a very sweet speech about how they would continue to "dodge fate" together, Jo starts to say her vows, when her stomach starts bleeding, and Kai reveals himself and pulls a large dagger out of his sister's stomach which has sadly killed her.

The sixth season was definetely full of action, love and drama, and the finale was a heart breaker, with Elena out of the show I'm not sure what will happen with the show as the last 6 seasons have been lets face it, focused around her life and it's happenings. Although a bit slow the first couple of episodes I suggest you keep on watching it as it does get really good, I can't wait for the next Season to begin!

In their latest adventure, The Wiggles Go Bananas! The fab four of fun have recorded some of their catchiest and most infectious songs to date. We jump into the heart of the groovy animal kingdom with songs such as Monkey Man, Kangaroo Jumping, Tasmanian Devil and Tiger Man. Along with Australia's John Waters (singing Rusty the Cowboy) and Ireland's Morgan Crowley singing The Unicorn. So jump into the jivin jungle with the kings of pre-school swing, as The Wiggles Go Bananas