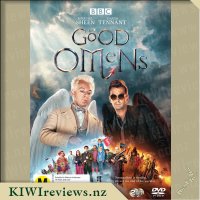 Disclosure StatementFULL DISCLOSURE: A number of units of this product have, at some time, been supplied to KIWIreviews by Universal Pictures NZ or their agents for the purposes of unbiased, independent reviews. No fee was accepted by KIWIreviews or the reviewers themselves - these are genuine, unpaid consumer reviews.
Available:
13th November 2019

The two have become overly fond of life on Earth, and they are forced into forming an alliance in an attempt to stop the approaching Armageddon. To do that, they have to find the missing Antichrist, an 11-year-old boy who is unaware that he is meant to bring the end of days upon humanity.

Michael Sheen, David Tennant and Jon Hamm star in the series, which is based on the book of the same name by Terry Pratchett and Neil Gaiman.

Terry Pratchett is an author that has been praised a lot by my mother and brother for as long as I can remember, Neil Gaiman is an author that I have enjoyed, so it seemed natural that I would end up reading the book. When I saw the trailer I KNEW it was going to go on my must watch list, so I was most pleased when I got a copy to review.

"Crowley: the angel who did not so much fall as saunter vaguely downwards" With lines like this, this is entertainment right up my alley. Tennant and Sheen are WONDERFUL as Crowley and Aziraphale, the demon and angel who become far too comfortable on earth and as the centuries pass, good friends (though they wouldn't admit that to anyone). Essentially, Crowley is tasked with delivering the infant antichrist to a human family but a mixup happens and he ends up the wrong family and thus eleven years later when the duo want to stop Armageddon, they can't find him. Along the way we have various prophecies being mentioned, written 300 years earlier by the only person to ever be accurate.

The casting is spot on, everyone played their role perfectly. When it came to the special effects it was easy to tell that they'd had a good budget for it and if you check out the special features on the second disc, there is an interesting segment where you can see the layers of special effects for moments such as Crowley driving in a burning car, I found this quite an interesting little segment. There are also some deleted scenes to check out, it was easy to see though why they were kept out of the final edit, but they were still fun to watch nevertheless.

What this show adds to things is a good deal of diversity (not that the book didn't already have a good mix of genders), here, the four horsemen are half male, half female and different nationalities, the demons and angels are the same and even better, God is narrated by a woman, with female pronouns used for God at times a as well. Even the credits have wonky timing at points, with one episode detailing Crowly and Aziraphales connections with each other, taking half an hour before we than have the beginning credits. The soundtrack was most memorable in the music used for the credits as well as the moments of Queen because "he was listening to a Best of Queen tape, but no conclusions should be drawn from this because all tapes left in a car for more than a fortnight metamorphose into Best of Queen albums."

At just a measly six hours, Good Omens was fun, delightful, well paced and full of many, many laughs, the acting was superb and it was a wonderful adaptation of a well loved book. This is one of those shows that I will be pulling out and watching again and again and again.

This refreshingly original show is by far the most accessible piece of live theatre to come along in years. The public already know Beau Tyler, the shameless self-improvement guru who has been selling us Tip Top's 'Memphis Meltdown' ice cream range for the last few years.