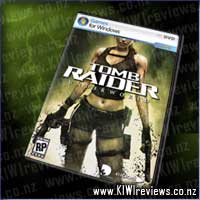 Designed specifically to take advantage of the latest technologies, Tomb Raider: Underworld represents a new advancement in exploration-based gameplay. As fearless adventurer Lara Croft, explore exotic locations around the world, each designed with an incredible attention to detail resulting in breathtaking high-definition visual fidelity that creates a truly believable world and delivers a new level of challenge and choice.

For generations, stories have been told of the fearsome weapon of the Norse god Thor. Legend holds that he who wields the hammer has the power to smash mountains into valleys and the strength to destroy even the gods. For more than a thousand years it has existed only as a myth, until now.

In an ancient ruin on the floor of the Mediterranean Sea, Lara Croft uncovers proof of the Norse underworld and the mythical hammer. As she attempts to unravel the secrets behind these myths, Lara's perilous journey leads her toward a forgotten power that, if unleashed, could lay waste to all civilization.

Tomb Raider eh, have been playing Tomb Raider since way back in the "triangular cleavage you could ski down" days of Tomb Raider 1. I love this series, the enviroments and charecters are always top notch and there's always an interesting story to the games. A third person shooter/adventure game.

This installment lives up to the name with large beautiful environments for you to explore and pretty graphics to keep you well immersed in the world, along with an interesting story that follows on from the previous game Tomb Raider: Anniversary.

The controls are nice and easy to use except for the camera which is at best horrible, especially when your driving things like Lara's motorbike, pretty much dont touch your mouse when your in a vehicle. Unfortunatly I would have to give this a low mark for replayability as there isint all that much game related content to unlock (mostly concept art) and the only expansions for it are coming exclusivley to consoles... yay!...

In this latest addition to the Top Trumps Specials range, Harry and his friends (and those he is not so friendly with!) are rated on categories including 'Magic', 'Cunning', 'Courage', 'Wisdom' and 'Temper'. Two or more players can play. Players deal the cards amongst themselves and one ... more...