« The Mummy : Tomb of the Dragon Emperor review

How to Train Your Dragon review 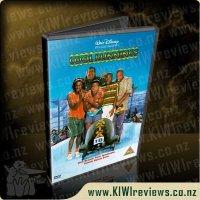 Finding the courage in each other to give it their all, they meet the challenge, and soon become heroes - taking the whole world along for the ride! You'll be cheering long and loud for this unlikely team in this feel-good comedy hit!

Cool Runnings is one of my all time favourite movies ever. I am a huge fan of true stories and even more so when they depict the trials and tribulations of the original people but shos them grow strength to strength and then triumph at the end. Cool Runnings is one of those such movies. The story of a group of young Jamaicans who due to faults not of their own do not make it into the Olympics even though they should have.

The boys, defy all odds to become the first ever Jaimaican bob sledding team. And sefy odds they did because there is not that much ice or snow in Jamaica. For some they battle family and friends in order to achieve this dream, just as they battle their own inner problems. And of course they most do this while almost the entire world is laughing at them.

Cool Runnings presents you with a wonderfully inspiring story. The joy, the heart-ache, and the sadness is all shown in this movie. It is full of good humour and many very funny moments, as well as some very sad moments too. It is brilliantly directed and all of the cast play their parts perfectly. I would pay to watch this movie over and over again.

If I had this on DVD, it would definitely be one of my top 10. I have never not watched this film. If I turn a channel and I see it's on, then it is now the film that I am going to watch. I don't care who wants to watch what. We are now all watching the rest of Cool Runnings.

It is really just an immensely heart-warming film. It is as inspiring as you can get. The proof of which is the latest Winter Olympics, where Tonga sent its first every athlete to compete. A man who never been to the snow before. A man who trained for by rolling down down the 'only' hill in Tonga. The fact that he came 32nd out of 39 people? It's amazing what one can achieve.

That is what you will find in this movie, based on a real story. Events that will remind you to strive for your dreams and to never give up. To always stand back up and walk proud, every time you fall down. Whilst glorified compared to the real events, and many creative changes, this film is well made, with many comedic elements, and is definitely one to watch.

It never fails to keep my attention, and if it were to be played at the cinema again, I'd definitely pay to see it.

Some friends and I went and saw the original movie when it was in the cinemas. Can't remember what made us choose this movie, but so glad we did as it was just what was needed a good laugh.

Starts off in typical fashion, someone has a dream and then something or someone always derails the dream but this time the guys were determined to achieve a dream and be the first Jamaican bob sled team. Had to laugh at some of the situations they found themselves in while training and how determined they were, must have been hard imaging snow when on the hot tropical island of Jamaica.

Absolutely loved this movie, must get my kids to watch it when they are a bit older. They think mum is already mad especially when I'm laughing at something that they don't quite understand.

Highly recommended if you are in need of a good laugh.

Although Cool Runnings has been out for a few years now it is still one of my favourite movies. The fact that it is so ridiculous yet is based (very loosely) on a true story makes it even funnier. The basic story is that so Jamaicans are convinced to form a bob sled team for the Winter Olympics even though they have never even seen snow.

The movie follows them through their unusual method of training to the big event. The late John Candy is well known for his comedic roles and in this movie he plays the American coach who convinces the athletes to participate in his dream.

There are messages in this movie of working hard, following your dream, if you want it to happen you have to make it happen. It is a great movie to watch with the kids. They will find it as funny as the adults.

This is one of my favourite movies of all time, it's right up there in the top ten, and twenty years later it still has me laughing, cheering them on, hoping that Junior will stand up to his dad at last, and every single time, crying at the end of the film.

Now, first thing to point out is that this film is Inspired By, not Based Upon the Jamaican Bobsled team. So don't expect to google it and find the story to be almost the same. Almost all of the movie is fictional but it is based upon a team of runners being turned into bobsleders.

Ignoring the events that this was inspired by you have a great movie. It has everything in a film you want, laughs, inspiration, drama and a lovely heart-warming finale. This movie has a really good moral to it, and that is to never give up, that no matter what others may think of you or what obstacles may get in the way, if you really want something, then persevere as you will get there eventually.

I really, really love Jimmy Cliff's rendition of "I Can See Clearly Now" and it has been a firm favourite of mine since I first saw this movie as a 5 year old. Cool Runnings comes with a rating of PG, but there really isn't that much fighting in the movie, and I would happily let my 5 and 3 year old children watch it.

Cybertron has fallen. When Optimus Prime sends Bumblebee to defend Earth, his journey to become a hero begins. Charlie Watson (Hailee Steinfeld), a teenager trying to find her place in the world, discovers and repairs the battle-scarred robot, who's disguised as a Volkswagen Beetle.

As the Decepticons hunt down the surviving Autobots with the help of a secret agency led by Agent Burns (John Cena), Bumblebee and Charlie team up to protect the world in an action-packed adventure that's fun for the whole family.