Home > Categories > Movies > Romantic > I Give It a Year review

Dora and Diego on the Big Screen review 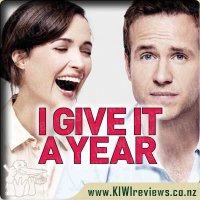 Disclosure StatementFULL DISCLOSURE: A number of units of this product have, at some time, been supplied to KIWIreviews by Hoyts NZ or their agents for the purposes of unbiased, independent reviews. No fee was accepted by KIWIreviews or the reviewers themselves - these are genuine, unpaid consumer reviews.
Available:
In Cinemas from 28 February 2013

I Give It a Year product reviews

Since they met at a party, ambitious high-flyer Nat and struggling novelist Josh have been deliriously happy despite their differences. Josh is a thinker, Nat's a doer..but the spark between them is undeniable. Their wedding is a dream come true, but family, friends and even the minister who marries them aren't convinced that they can last.

Josh's ex-girlfriend, Chloe, and Nat's handsome American client Guy, could offer attractive alternatives. With their first anniversary approaching, neither wants to be the first to give up, but will they make it?

I first heard about I'll Give It a Year when a couple of the cast were on The Graham Norton Show. The clips they showed had me in hysterics and I had to see it. Surprising for a Saturday there were only seven of us in the theatre and only two were males, one being my husband. Although we went thinking it was more my kind of movie than his there one point he was laughing uncontrollably. This is an adult's movie. It is full of sexual references and has full frontal male nudity. There is also a bit of profanity. All stuff you don't want your kids to see.

This movie leaves the politically correct world behind. Everything that could be said or done at an inappropriate moment is. Starting at the wedding where the minister has an uncontrollable coughing fit and the best man's speech contains everything you don't want to hear about the bride and groom. It follows the first year of their rocky marriage. Nat and Josh are so different from each other and neither has been accepted by the other's friends and family. Throughout they both find their marriage isn't as idyllic as they imagined and seek help from the world's worst marriage guidance counsellor.

This movie really suited me and my sense of humour. I found the plot very predicable and I cringed as I realised what was going to happen next. I felt sorry for the couple but I could also see in them several couples I have known. It is a real laugh out loud comedy where true love conquers all.