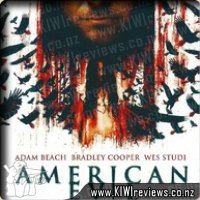 American Evil is also known as "Older Than America"

A series of terrifying visions lead a young woman to an abandoned school house on an American Indian reservation. Her local Catholic priest refuses to discuss the matter with her and even her own relatives seemed agitated at her story. Why are they afraid and what are they hiding.

As her visions become more shocking, her determination to discover their meaning intensifies. With the help of a local reporter they are soon thrown deep into a world of ancient superstition & cultural genocide.

Based on a shameful chapter of US history on the stolen generation of native American Indians and the cover up that lasted till this day.

When you find out a movie was made and finished 5 years ago, and only just given wide release, it makes you wonder about the worth of the film. Most likely, it was only re-released due to Bradley Coopers rising star. Events highlighted in this movie were based upon real events in American history, but due to their attempt to make this a supernatural thriller, it feels fake and one doesn't feel curious about events this is 'based upon'.

Bradley Cooper stars as Luke, a geologist who comes to a Native American community in Minnesota in order to investigate a mysterious earthquake.While there he befriends a local cop whose wife, Rain,is having terrifying visions involving Native American schoolchildren being abused by Catholic priests (this is the based on real events part), but she fears she is inheriting her mother's mental illness (the supernatural part of the movie).

While it is good to have a film that highlights true history, Native American children were forced into a boarding school where they weren't allowed to be their culture, and were abused, this is all lost in a film that just can't quite mesh all it's elements together that well.

Whilst Bradley Cooper would appear to be a big character in the film, he isn't, and this is a movie that can't seem to choose who the main character is. And the horrifying visions, mediocre at best.

The action-adventure mystery 'Sherlock Holmes' is directed by acclaimed ... more...