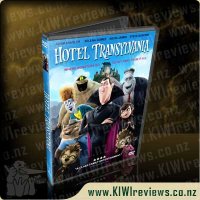 Disclosure StatementFULL DISCLOSURE: A number of units of this product have, at some time, been supplied to KIWIreviews by Roadshow (NZ) Ltd or their agents for the purposes of unbiased, independent reviews. No fee was accepted by KIWIreviews or the reviewers themselves - these are genuine, unpaid consumer reviews.
Available:
Yes

Haha I love Hotel Transylvania. I won the DVD in a Halloween competition last year, and it has been watched a gizillion times since we received it. It is a great movie for all the family featuring Dracula, his daughter, the Werewolf family, the Invisible man (huh?? Ok so his voice and at times his accessories lol), sandman and many more.

They have all descended on Hotel Transylvania to celebrate the birthday of Maria, Count Draculas daughter. In a bizarre twist of fate, a lost 'Human boy' also ends up at the Hotel. As the movie progresses Maria and the human fall in love, causing much stress to Dracula. How does it all end up? You will have to watch it and see :)

One of my favorite things about this movie is how much the characters in the movie look like the actors of those who voice them, the similarities are uncanny, purposely done? I do not know, but most definitely awesome. My favorite line is 'blah blah blah' lol to fully understand the meaning behind that you really need to watch the movie. It is awesome and I guarantee you will not be disappointed. The laughs are all there, and every moment of the movie is a great one.

I almost missed this film, due to the rather unimaginative title. It didn't sound particularly interesting, but a friend had it, so I gave it a view. The story follows Dracula, an overprotective father who owns a hotel for monsters to be safe from the threat of humans. His daughter, who of course has become a rebellious youth in what is comparatively her teenage years (technically her 118th birthday).

Dracula is plagued with problems; a human has entered the hotel, his daughter wants to venture out into the world, and he has to organise a kick-ass party. Of course, it never goes according to plan, and Dracula ends up having to fight hard for his daughter's love and trust. A truly heart-warming film, that shows the pains that a single father goes through, as he tries to balance allowing freedom and the protection of his daughter from an unknown world that he has become isolated from.

This film was great, with appearances from all of the classic monsters, from the invisible man, to bigfoot, werewolves, mummies, and frankenstein. A great comedy for all ages, it proved worth a watch, and I shall be keeping this one in my arsenal for when it's my turn to babysit.

This movie is lovely. I have seen it now at least a million times as both of my girls absolutely love it. Count Dracula has opened up a hotel for monsters to stay at so they are safe from the humans. Dracula lost his wife to humans years before and since then has been terrified of them. So with his daughter Mavis, they live in the lavish five star resort until Mavis's 118 birthday where an unexpected visitor could destroy everything.

I have to admit the first time I watched it I did not enjoy that much but after giving it one more go, really enjoyed it. Absolutely love the rap at the end "the zing" and both of my girls always get off there seats and dance away to it. Its fantastic. Adam Sandlers voice is usually annoying but in this its great and really works.

It is a lovely love story of an over protective father who just wants the best for his daughter. A daughter who wants to see the world and experience that very special 'zing' and a guy just traveling around with his only agenda is to have fun and enjoy all of life's experiences. "Johnnystein" helps Count Dracula as he tries to make Mavis birthday party the best ever, and along the way he also learns valuable life lessons.

This movie is great for the kids. Its not to heavy and yes very predictable but with all of the quirky monsters its fun to watch. Highly Recommend

I found this to be a great little movie for the kids, we have it on DVD and its one the kids go back for time and time again.
I have a 6yr old and 3yr old, boy and girl, and they certainly know what movies they do and don't like.

With this movie I don't have to worry about the kids mimicking rude or inappropriate words or catch phrases which a lot of kids movies have these days. The length of the movie is fine, no one got bored. We played this at my sons 6th birthday and everyone watched it to the end even the kids who sounded of at the beginning that they had already seen it before!

This is just a sweet little movie with funny characters, catchy song at the end, which I still find myself singing.

We borrowed this on DVD as an end of the holidays treat for my 5 year old and 3 year old. I had seen trailers for it, and whilst it did look like it might be fun, I wasn't interested enough to go and see it, plus, even with a Dracula accent you still knew it was Adam Sandler.

There is a good heart at this film. Dracula lost his wife, the love of his life, and so created a hidden, safe, hotel to raise their daughter in, where she would be safe from humans. Every year, for her birthday, monsters from far and wide, of all types come to the hotel to help celebrate.

Everything has gone well, and so far Dracula has kept his little girl safe, but at her 118th birthday she wants to go see the world. While trying to stop her, Dracula inadvertently lets a human into the hotel and must now find a way to get rid of him without anyone, especially his daughter, find out.

My 5 year old was engrossed in the film and really enjoyed it. My 3 year old, though, got restless after an hour and no longer cared what happened. There were a few good jokes for the adults, but not enough that I would sit down and watch this again without the kids next to me.

In Sony Pictures Animation's Hotel Transylvania 3: Summer Vacation, join our favorite monster family as they embark on a vacation on a luxury monster cruise ship so Drac can take a summer vacation from providing everyone else's vacation at the hotel.

It's smooth sailing for Drac's Pack as the monsters indulge in all of the shipboard fun the cruise has to offer, from monster volleyball to exotic excursions, and ... more...