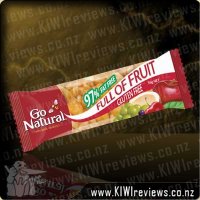 Disclosure StatementFULL DISCLOSURE: A number of units of this product have, at some time, been supplied to KIWIreviews by Dutch Rusk Ltd or their agents for the purposes of unbiased, independent reviews. No fee was accepted by KIWIreviews or the reviewers themselves - these are genuine, unpaid consumer reviews.
Available:
at selected quality retailers

Dairy-free and cholesterol free. The goodness of fruits blended in a great tasting 97% fat free bar.

I wasn't too sure about this when I picked it up as it felt rather soft in comparison to the other bars, so I opened it up, feeling rather unsure about it.

I also found this to be prickly. Looking at the ingredients I see that it has cornflakes in it and so I think that it was this that I found to be sharp. Just not a texture that I would want to eat, especially when I get a couple of sharp pains in my mouth from it.

The visual appearance of the bar is nice, just as the rest of the brand is, but I wouldn't buy this or wish to eat it.

Here is another product in the go natural range of bars. Like all of their products the packaging is great as to be expected, you can see what you are buying.

This is another gluten free product, and I can easily say that it tastes pretty good, doesn't taste terrible at all, but does it taste like what I expected? Well the short answer is no.

Having a think about it, making a bar that is full of fruit, tasty and presentable must be a challenge, it would be hard to bind everything together, not be too sweet with all of the fruit, and make it actually look appealing to eat.

So the full of fruit bar does have fruit in it, just not as much as I would have through by the implied name, it does taste nice. Which is always good, but the taste of other things like the puffed corn which is in the bar is not what I was expecting.

For the price, I think I would choose another bar in the range over this one.

I pulled off a small bit of the Go Natural Full of fruit bar to share with a three year old and a four year old. The three year old didn't say much when I asked her about it except "It was cool." She did however ask for more. My four year old was much more vocal in her reviewing of the bar. "Yummy. I love them. Thank you, thank you. It tastes like yummy." She too begged for more.

This bar was my least favourite of all the bars in the Go Natural range. It was like a cheap muesli bar you would get in a multipack at the supermarket. It wasn't really full of fruit as the name would have you suggest - it was full of cereal; rice bubbles, honey puffs and cornflakes. It was definitely a chewy bar thanks mainly to the honey. The cereals gave it an audible crunch which I noticed more when the girls were eating their pieces.

If I was offered some more of these bars I would take them because the kids love them but I doubt I will be buying them at $2.50 each. I am wondering if my opinion of these would be different if I hadn't tried all the other gourmet bars in the range.

I was quite surprised by the Go Natural Full of Fruit bar. It wasn't half bad. I have to be honest and say I expected it to taste somewhat like cardboard, due to previous experience with some gluten free products. But much to my surprise it was far from a cardboard taste (although I must clarify, I don't actually know what cardboard tastes like).

The one thing I noticed over and above anything else was the sticky outside of the bar. I did not expect it to be quite so, but I was pleased that the stickiness did not cause it to stick to the packaging.

Speaking of packaging...attractive, eye catching, relatively easy to open, And clear enough to see what the actual bar looks like (this is important).

I actually enjoyed the flavor of this bar, I thought everything blended together quite nicely, even the puffed cereals seemed to fit. I wonder if there really was 33% fruit in there though, as it is called 'Full of fruit' yet seemed to lack a little here, also the honey tended to over power the fruit flavors.

All in all a nice product, and would be something I would be happy to have at my side on the long nights while studying or to take to exams, but the price may prevent this from happening to often though.

Highly nutritious and packed with healthy nuts, grains and fruit, this bar seems to tick all the boxes for me. I have always enjoyed fruit and nut bars, even without chocolate included. And despite a couple of small issues, this did indeed come over as a very healthy and fairly tasty snack.

So, what were the issues? Firstly, after the first bite and a bit of chewing, the predominant flavour I got more than any other was... popcorn. That would be the "puffed corn" mentioned in the ingredients list on the back. I wasn't expecting the flavour to be so obvious - let's face it, plain popcorn isn't exactly a tongue-beater of a flavour... and yet it was the one taste that stood out above all others the longer I chewed.

Did I enjoy it? Yes, mostly. I wouldn't say it really blew my tastebuds away, but it was a pleasant snack that was different enough to warrant a try, healthy enough I didn't feel guilty eating it between meals, and filling enough to take the edge off my hunger without spoiling my appetite for dinner to come. Would I recommend it to friends? Quite probably, if I knew their tastes well enough to think this might be something they would like. Would I pay $2.50 for it in the shops. Not very likely sorry.

Overall, this is a little on the pricey side... but then, isn't all healthy food costly these days? I guess it's about normal for an imported healthy snack food, but I would be happier to see it around the $2 mark. I can't see many other uses for this bar, other than as a stand-alone snack, but you could perhaps use it as a base for something a little different in the way of a party snack, breaking it up and using it as a sweet crumble over a mound of frozen-yoghurt, sliced banana and some fresh berries - that would go down really nicely I think!

The packaging on this bar is really high quality, like the rest of the bars in the GoNatural range. I do like that there is a clear section in the packet so you can see the bar you are about to purchase.

GoNatural full of fruit is not very full of fruit. Looking at the ingredients in the packet, it has 33% fruit. Dried fruit pieces of sultanas, currants, coconut, apple and cherries feature. Even if you just look at the bar, there is very little fruit showing.

The honey is sticky on the outside and this bar is very chewy. Adding to the chewiness is the cereals in the bar. Cereals that feature are puffed rice, cornflakes, and puffed corn too. The puffed corn is like flavour-less popcorn, making it super chewy indeed.

With this bar, you can mostly taste overly sweet honey. The next flavour is the puffed cereal pieces and the occasional bit of fruit. More fruit would have made this bar even sweeter though.

This bar was just not my sort of thing. It was too sweet. It was too much like a muesli bar or an LCM bar. I wanted to like it but I wouldn't buy this if it was in a shop. Not compared to the other delicious bars in the range.