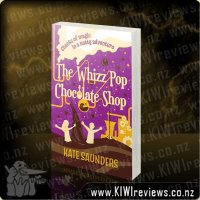 Welcome to the most magical house in London.

Oz and Lily's family have inherited it, together with the mysterious shop downstairs. Long ago, its famous chocolate-makers were clever socerers. Now evil villians are hunting the secret of their greatest recipe. The terrifying power of this magic chocolate could destroy the world. The children are swept into a thrilling battle, helped by an invisible cat, a talking rat and the ghost of an elephant.

I have just finished the Whizz Pop Chocolate Shop this afternoon and what a cool book. Okay, it did take me a good 30 pages to really get into the storyline. At first the characters and their background seemed a bit forced. Once I ignored that, and suspended my disbelief I really started to enjoy the book.

It is a long book, at 290 pages. But I remember when I was a kid, that gave you some major bragging rights if you could claim to have read a book that long. I can imagine this book being a good read for a kid of 8 - 10 years old, and even older. I'm in my 30s and I enjoyed it.

Its an easy enough read. Lots about magic creatures and potions, etc. So its a little Harry Potter but more in the real world. Some of the things that happen might be a little scary for the younger reader. But the author deals with them in a sensitive way. There were moments were I had tears forming in my eyes and the last 100 pages I couldn't put down.

Because the main characters are boy/girl twins, I think that might make it easy for the book to be enjoyed by boys and girls alike. I didn't bother to share the book with my daughter as it didn't have any pictures but I told her about the book and described some of the scenes yesterday and she was pretty interested. So I might share some of the book with her tonight after school.

The cost of the book seems high compared to other series for this age group. But this book is a good 150 pages longer than other books so I think the price is pretty good really.

This is a crazy 290 page book. A novel aimed at years eight and up it started off well but was just a bit too ridiculous way too quickly for my tastes.

Twins Oz and Lily move into a magical house that their father has inherited from "dead" uncles. The blurb (above and on the back of the book) describing the plot tells it all really but I just found the story stranger and stranger and eventually unreadable. The SMU unit has the power to erase peoples memories so whatever ridiculous stuff happens (and there is a lot) they just then erase everything so it's as though it never happened and there is lots of casting of magic spells that seems to make all the adults completely unaware of how bizarre everything is. I don't want to ruin the story in case you do decide to read this book but it doesn't really enhance one's life to read it...

If you enjoy goblins and magic chocolate and spies and talking cats and rats and random elephant ghosts then give it a go.

This book was just too bizarre to even be readable for me. I am not sure (not being eight) if an eight year old would enjoy this but I suspect it won't be a top ten to buy for Christmas. There are so many other good books out there for this age group I am not sure that I would promote this as a good read.

Tim tries out for his school team but keeps getting pushed off the ball and does not make the side. The coach tells him he is just not big enough to cut it with the other kids. Devastated, Tim tries some unconventional ways to make himself taller, with not very successful but hilarious results. He finds the best thing to do is practice hard with his brothers and friends. Confronted with a tricky situation, Tim comes to realise that although he ... more...