Home > Categories > Books > Fiction > A Song for the Dying review

« Birthdays for the Dead review

ProdID: 5438 - A Song for the Dying
Written by Stuart MacBride 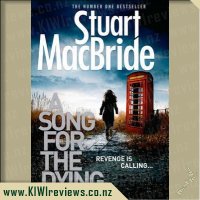 A Song for the Dying product reviews

A heart-stopping crime thriller and the fourth consecutive No. 1 Bestseller from the author of the Logan McRae series and Birthdays for the Dead.

He's back...
Eight years ago, 'The Inside Man' murdered four women and left three more in critical condition - all of them with their stomachs slit open and a plastic doll stitched inside. And then the killer just...disappeared. Ash Henderson was a Detective Inspector on the initial investigation, but a lot can change in eight years.

His family has been destroyed, his career is in tatters, and one of Oldcastle's most vicious criminals is making sure he spends the rest of his life in prison. Now a nurse has turned up dead on a patch of waste ground, a plastic doll buried beneath her skin, and it looks as if Ash might finally get a shot at redemption. At earning his freedom. At revenge.

What lengths would you go to for revenge? Ash has nothing to lose, his family is all gone and he is serving time for murder. How do you manage to survive in prison when it seems that someone has a reason for keeping you inside?

Who is "The Inside Man" and why is he killing nurses and cutting them open and then putting a toy doll inside their tummies? Ash feels guilty as he was on the original investigation and he feels that he is responsible for letting The Inside Man go.

The force is full of bent cops and crime is high. A child sex offender manages to strike again right under Ash's nose, mistakes are made and assumptions are proved right, a rapist is caught quite by accident and plans for revenge go wrong. I'm glad that this book also showed that women can also be guilty of committing crimes.

Characters are well written, good people start to drink (who wouldn't with that kind of job?) and look the other way when things go wrong and never want to see the bad in people. This book is a lot darker than the other books, would still read the rest of the series (if there is any more of the series to read) but wouldn't recommend to anyone who has nightmares easily.

Score: 9.0
Product reviews for listing 6925: See How They Run
Written by: Ally Carter

The only way to put the past to rest is for Grace to kill it once and for all. On Embassy Row, power can ... more...