« The Avengers: The Movie Storybook review 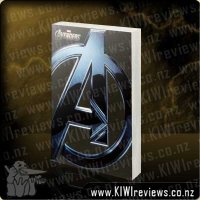 Disclosure StatementFULL DISCLOSURE: A number of units of this product have, at some time, been supplied to KIWIreviews by Scholastic (NZ) or their agents for the purposes of unbiased, independent reviews. No fee was accepted by KIWIreviews or the reviewers themselves - these are genuine, unpaid consumer reviews.
Available:
April 2012

Based on The Avengers, Motion Picture 2012.

Nick Fury and S.H.I.E.L.D. are faced with a foe no single person can defeat. So Fury sets out to bring together Earth's Mightiest Heroes and form the Avengers! Join Iron Man, Captain America, Thor, the Hulk, Black Widow, and Hawkeye as they battle the Asgardian Trickster known as Loki. Loki plans to unleash a dangerous and powerful force upon the Earth.

If he succeeds, the world as we know it will change forever - for the worse. Can the Avengers work together and rescue mankind from this vile villian's cruel grip? Or will Loki disassemble this new team and become the ruler of Earth?

The Avengers book cover is a bit drab, being a dark grey/black with the Avengers 'A' drawn onto it with the red marvel logo and Avengers in the top left. I think that it would've been better if there was a photo of the Avengers all together or as a screenshot of the movie. I think it would be a lot better if the designers had put a bit more effort into the cover.

One thing I loved with the book was the larger print making it easier for me to read without the glasses. In the start of the book we are introduced to Steve Rogers when during the world war was enhanced with a 'Super Soldier Serum' and vita rays to become known in his later life as Captain America, the first avenger. The next few chapters are about how the other Avengers were born. First there's Bruce Banner aka; The Hulk then Tony Stark: Iron Man and the others. In between there are little bits of history of Asgard and Thor and Odin.

Having watched all the movies of the individual Avengers we were told in the Ironman film at the end, Nick Fury approached Tony Stark, about the avengers initiative. At this time we had the humorous outcome that Nick wanted Iron Man but not Tony Stark due to his more out there personality. This humorous take was also portrayed in the book very well I thought. Later through the story Loki comes to earth and breaks into the S.H.I.E.L.D. base and steals the super powered object; the Tessaract. When Loki threatens the earth with his new power the Avengers Initiative is brought together with all its members to defeat Loki and save the world.

I loved reading this book and am glad it was read after having seen the movie. I can't wait for the next instalment of the Avengers.

The cover is not the most attractive, being a black cover with a silver Avengers "A" on it. Considering the lovely spread of colour photos inside the book, it would have been nice to have something more enticing like a group shot of all the heroes on the front.

The book itself, billed as a novelisation of the film, is a bit disappointing in that regard. In fact, the majority of the book is taken up with adapting the various movies that led up to Avengers (Iron Man 1 & 2, Incredible Hulk, Thor, and Captain America: The First Avenger). This takes up 120 of 160 pages in the book. The adaptation of the Avengers movie itself is fairly brief and takes up the last 40 pages of the book.

Having said that, if you go into the book knowing that it's not a straight adaptation of the film, it does provide and entertaining summarisation of the whole cinematic saga. The writing style is brisk and engaging, and is aimed at readers of about 12-13 years, I would estimate. The print size is fairly large as well, and young readers should find this an entertaining read, though adult readers are likely to find it lacking in sophistication.

Score: 5.6
Product reviews for listing 6381: The Caretaker of Imagination -  Written by ZR Southcombe

Bored with his normal life, John Carroll runs away with his faithful cat in search of adventure. When he meets a real-life pirate, John realizes there is much more to the world than he'd ever thought possible - magic is real, and in desperate need of a hero.

John must convince the (once fearsome) Captain Simon Peabody to join him on a fantastic and perilous quest to find the only person who can save magic from being lost forever: the Caretaker of Imagination.