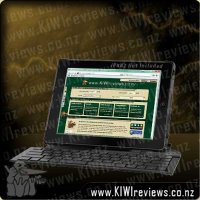 Disclosure StatementFULL DISCLOSURE: A number of units of this product have, at some time, been supplied to KIWIreviews by Logitech or their agents for the purposes of unbiased, independent reviews. No fee was accepted by KIWIreviews or the reviewers themselves - these are genuine, unpaid consumer reviews.
Available:
at selected quality retailers

Your iPad 2, Your notepad.

Run from meeting to meeting or class to class without missing a thing. Closed, the keyboard rests securely underneath your iPad 2.

Open, it holds your iPad 2 at an ideal angle for typing and taking notes. Unlike folio-style Bluetooth keyboards, our Fold-Up Keyboard is full-sized for comfy typing.

The keyboard wakes up and is ready to use as soon as it's unfolded. And it turns itself off automatically when it's folded to save battery power. It charges over USB, so you never need to worry about replacing batteries. It's on in an instant.

Attached to your Smart Cover? No problem. You can keep on using your Smart Cover with your Fold-Up Keyboard, so there's no need to sacrifice the protection and style it provides.

It's a smooth operator. When typing on your iPad 2 with your Logitech keyboard, you can gain time by using shortcuts for the commands you use most often, such as copy, paste, undo and many more.

iPad Not Included. Used in image for illustrative purposes only.

I was very impressed with the Logitech Wireless Keyboard for the iPad and it is so simple to operate too.

The Wireless Keyboard really is simplicity itself. Once charged (and it came pre-charged so one was able to use it straight away). Insert the iPad, Press a button on the back to release the keyboard and fold out ready to use - just set up the iPad to look for it on Bluetooth and that is it - it really is THAT simple to use.

The keyboard is fully functional (without the separate number keypad), and with a press of the function key, one has plenty of extras too, so you can operate the music (fast forward, speaker on/off) volume and so on. The keyboard folds in and out very easily and switched on/off as the keyboard is opened or closed.

The battery has a very long life - estimated at 500 hours on standby. The charge time is quick. However it is noted in the documents that the battery once it fails cannot be replaced. One should remove the battery (destroying the keyboard in the process) and replace it with a new one. But given the long battery stand-by time, realistic use time, the amount of charge cycles I think one is more likely to wear out the keyboard before the battery fails.

The Keyboard works seamlessly with the iPad, with all functions on the iPad itself easily accessible with the exception of the rear camera. Both iPad and Keyboard can be easily charged in-situ. The keyboard doesn't feel overly bulky when folded away and it does work well with iPad's own smart-cover.

Other than the initial investment, there is little one can say against it. Everything is intuitive and easy to use, there is little too go wrong. All in all, it is quite a handy little gadget. This review was typed out using it!