ProdID: 3181 - When She Woke
Written by Hillary Jordan 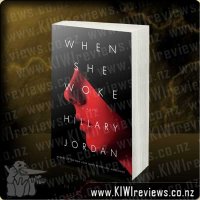 When She Woke product reviews

"I am a Red now." It was her first thought of the day, every day, surfacing after a few seconds of fogged, blessed ignorance and sweeping through her like a wave, breaking in her breast with a soundless roar. Hard on it's heels came the second wave, crashing into the wreckage left by the first: "He is gone."

Hannah Payne's life has been devoted to church and family. But after she's convicted of murder, she awakens in a new body to a nightmarish new life. She finds herself lying on a table in a bare room, covered only by a paper gown, with cameras broadcasting her every move to millions at home, for whom observing new Chromes - criminals whose skin colour has been genetically altered to match the class of their crime - is a sinister form of entertainment. Hannah is a Red for the crime of murder. The victim, says the State of Texas, was her unborn child, and Hannah is determined to protect the identity of the father, a public figure with whom she shared a fierce and forbidden love.

This is a timely fable about a woman cast out in a world that has marked her for life, where convicted felons are no longer imprisoned and rehabilitated, but instead are Chromed and released back into the population to survive as best they can. In her search for a path to safety in this alien and hostile world, Hannah unknowingly embarks on a journey of self-discovery that forces her to question the values she once held true, and to risk everything to protect the man she loves.

In the early days of the British colonial expansion, if you were caught stealing while aboard ship, you were convicted of piracy, and had the emblem of the East India Trading Company physically branded into your flesh, forever to show the world that you were little more than a third-class citizen at best, scum at worst, and not to be helped or aided by any respectable citizens. Some turned this mark of shame into a badge of honour and began the tradition of "Piracy on the High Seas" that still continues - in a more modern guise - today in some parts of the world.

This tale is very similar in basic concept. Instead of a brand, that could be covered up, obscured, or simply cut away, we have the introduction of a gene-altering virus that changes the skin's melanophores to produce a specific colour - effectively redefining you as a colour instead of a person. The whole rainbow is there... from the petty criminals like thieves being Yellows, the child molesters and rapists being made into Blues, and murderers becoming Reds. The backstory being an endemic sexually-transmitted plague that wiped out large sections of the population by simply making women sterile, and men carriers. Even after a cure was found, the mindset of children being precious - as they were still rare due to the very small percentage of women escaping uninfected - promoted a return to the religious fundamentalism that has abortion and pro-choice being a crime akin to premeditated murder.

Hannah, a devoted church-going girl in a family of devout followers, hides a secret passion for a life less bland. A life in which sewing functional clothing is not enough, where the sheer joy of making beautiful clothes that flatter and stimulate is a guilty secret she can not share with anyone... until she meets someone she can not possibly have. A man both public and powerful, and worse - married. But she falls in love with him, and he with her too. A secret kiss leads to much more, and soon she is an office volunteer by day, devoted mistress by night. Then the world cracks open and falls apart when Hannah discovers she is pregnant. She can't keep the child - it would destroy the man she loves - his ability to do good and help so many others would never survive the revelation and would kill his soul as surely as a bullet would kill his body. So, Hannah does the unthinkable - she finds a doctor willing to give her a termination. In legal eyes, the murder of her unborn child.

All of this is given to us in retrospective bites throughout the story. The story begins with her waking up after being Chromed, in the isolation cell she must remain in for the first 30 days of her sentence. After this, she enters a nightmare world where mothers pull their children away to walk on the other side of the street, shopkeepers refuse to serve her, where her crime is on public display. Maybe not the fine details of it - that would be ever more horrific to try and live through - but enough to make people aware "This person killed someone!" screamed out in bright red skin.

To be honest, some aspects of Chroming appeal to me. some criminals - such as sex offenders, murderers and the like - should not be able to blend in with the population and hide their crimes... but Chroming is not permanent it seems. "Time heals all wounds..." and can apparently hide all crimes too... so I was impressed that Hillary addressed these dual issues quite well. The 'science' holds up to basic scrutiny. For me, this made the story so much more accessible - I can't stand a story that steps outside of our current level of technology and just asks us to accept it on blind faith. If I wanted to do that, I'd read a holy doctrine or a political party manifesto.

Overall, though the tale strikes me more as capturing the attention of female readers more - due to the intimate nature of the crime and the heavy emotional rollercoaster of the plot - I still found myself happy to read it any chance I got. I wouldn't class this a high on my re-read list, but it may be one I come back to again sometime to help me clarify some ideas on how to address 'just around the corner' technology when I get back into writing again.