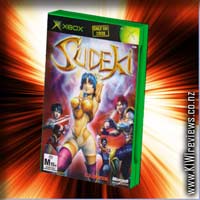 Four warriors have joined together to aid their queen. Though destined to encounter ancient gods, primordial wonders, and marvelous inventions, foes and betrayal haunt their every step.

A keen eye could prove vital, exposing essential clues. And as the companions make their way through darkness and light, they'll discover that those two extremes have more in common than they once imagined...

Reclaim a universe shattered by darkness and deceit.

I have to agree with my esteemed fellow reviewer this game kicks a**. Whilst it has an easy learing curve it's difficulty is suffcient to keep me playing for a few hours whilst totally losing track of the time, and at the end of it feel like it was worth it and wanting to go back and try and get just that little bit further.

Ahhhh... the good old days, when I used to RPG and actually understand all the numbers. I can still recall the joyous swell of pride as I earned those last 2 vital Experience Points and jumped up a skill level to DemiGod... now let's go kick some demon butt! But alas, work made Jack a dull boy, and now RPG is just 3 letters.

Until I got a chance to play Sudeki on the Xbox. Gone are the fiddly dice-rolls... gone are the hours of planning combat rounds that last 5 minutes... this is pure joy! Hack, slash, cast and climb, flip and fall, hack and slash... and in the process you will gain skills, go up levels, fight bigger and nastier monsters... Awesome!

Hints: PRACTICE! Combat is NASTY by the time you hit 3rd level fighter even, so plan your skill upgrades well, for progress can be shortlived if you take the wrong path.

Overall, this is one dinky cool game! I stayed up til 3am playing it! And I plan to kick more Aklorian butt tonight too! :)

The traditional game of LUDO is a perennial favourite amongst children of all ages. However, in this ingenious and novel new version, the fun of the game is elevated to new levels, courtesy of 3d.

In 3d LUDO, the game plays just as it always has done, although this time with an added twist. if you land on an opponent's playing piece, you win the right to drop that ... more...