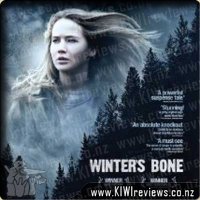 With an absent father and a withdrawn and depressed mother, 17 year-old Ree Dolly keeps her family together in a dirt poor rural area. She's taken aback however when the local Sheriff tells her that her father put up their house as collateral for his bail and unless he shows up for his trial in a week's time, they will lose it all.

She knows her father is involved in the local drug trade and manufactures crystal meth, but everywhere she goes the message is the same: stay out of it and stop poking your nose in other people's business. She refuses to listen, even after her father's brother, Teardrop, tells her he's probably been killed.

She pushes on, putting her own life in danger, for the sake of her family until the truth, or enough of it, is revealed.

There were only two Best Picture Oscar nominees from last year that I didn't manage to see in theatres, so today I decided to catch up on one of them, Winter's Bone (The other one being The Kids Are All Right). Winter's Bone was something of a sensation on the festival circuit last year following it's debut at Sundance last year, scooping a bunch of awards and making a star of the previously unknown Jennifer Lawrence (as seen in X-Men: First Class and soon in the adaptation of the Hunger Games novels). It's a solid, moody film which is unfortunately hampered by a somewhat dull and unfocused story, a problem I see in a lot of independent drama.

The setting of a small American community seemingly under the control of methamphetamine dealers makes for some beautiful and haunting imagery which matches the bleak tone well, and a feeling of cold seeps through every desaturated frame of the film. Ree (Lawrence) is a teenager struggling to raise her young brother and sister and care for her mentally ill mother, while also searching for her absentee father to ensure he makes a court appearance so the family won't be turned out of their house. She's something of a wonder-kid, selflessly juggling all of these difficulties, and it just seems a little far-fetched. In the hunt for her father, Ree visits various acquaintances to gather clues, adding a nice element of mystery to the story, but again the realism of the film's construction and performances doesn't extend to the story as Ree runs afoul of the higher-ups of the town's drug hierarchy. There is no satisfying explanation offered for why so many people react to Ree with such hostility, but the implication is that asking questions leads to trouble. However, Ree's claim that she is a 'bred and buttered' member of the community surely extends to a knowledge of its pervasive drug influence, and the idea that a young girl would be treated so badly by so many stretches the limits of believability a little too far, and reeks of emotional pandering.

While this type of overly melodramatic plot is sadly quite common in American independent productions, the quality of the acting does go a long way to redeeming Winter's Bone. The film works as a character study with Lawrence shining in every single scene, and the massively underrated John Hawkes (Me and You and Everyone We Know, Deadwood) is typically excellent as Ree's uncle Teardrop. Working with a fairly small part, Hawkes injects such humanity into the character, and he's by far the best part of the film. Lawrence is well on the way to becoming a huge star, but hopefully the success of Winter's Bone will also allow us to see more of Hawkes in future, as he's truly a class act who needs to be in more films.