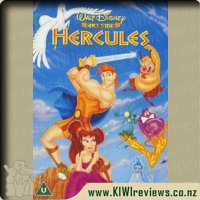 Hercules, son of the Greek God, Zeus, is turned into a half-god, half-mortal by evil Hades, God of the Underworld, who plans to overthrow Zeus. Hercules is raised on Earth and retains his god-like strength, but when he discovers his immortal heritage Zeus tells him that to return to Mount Olympus he must become a true hero. Hercules becomes a famous hero with the help of his friend Pegasus and his personal trainer, Phil the satyr. Hercules battles monsters, Hades and the Titans, but it is his self-sacrifice to rescue his love Meg which makes him a true hero.

With wit, comic timing and a fresh plot this is a fun movie to watch with the family.

I was hooked right from the start when the five Muses set the stage of ancient Greece in a powerhouse gospel number which gives a whole new meaning to a Greek chorus and the Muses appear randomly throughout the movie to narrate the story of Hercules with jazzy musical numbers that you'll be humming for days. The songs are really great and fit perfectly, I like "I Won't Say (I'm in Love)" and "Go the Distance", I have them on my MP3 player even now.

Another of the highlights is the heroine Meg, she's sassy, sexy, cynical and dangerous and Hades is also a fun, witty character, although plenty dangerous in his own right. Of course liberties have been taken with Greek mythology. The dysfunctional, the Olympian family all get along far better than they do in Greek mythology, and Hercules is more a round up of a few different myths, I love Greek mythology and so this is a fun movie for me.

This is a fun addition to the great Disney line of animated movies, if you don't spend your time comparing it to the myths of old then you will have a lot of fun.