Rena's Promise: A Story of Sisters in Auschwitz review 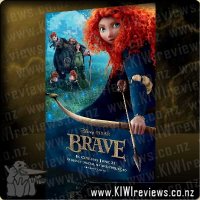 Disclosure StatementFULL DISCLOSURE: A number of units of this product have, at some time, been supplied to KIWIreviews by the company for the purposes of unbiased, independent reviews. No fee was accepted by KIWIreviews or the reviewers themselves - these are genuine, unpaid consumer reviews.
Available:
In cinemas from June 21st 2012

Set in the rugged and mysterious Highlands of Scotland, Disney-Pixar's "Brave" follows the heroic journey of Merida (voice of Kelly Macdonald), a skilled archer and headstrong daughter of King Fergus (voice of Billy Connolly) and Queen Elinor (voice of Emma Thompson).

Determined to change her fate, Merida defies an age-old custom sacred to the unruly and uproarious lords of the land: massive Lord MacGuffin (voice of Kevin McKidd), surly Lord Macintosh (voice of Craig Ferguson) and cantankerous Lord Dingwall (voice of Robbie Coltrane), unleashing chaos in the kingdom. When she turns to an eccentric Witch (voice of Julie Walters), she is granted an ill-fated wish and the ensuing peril forces Merida to harness all of her resources - including her mischievous triplet brothers - to undo a beastly curse and discover the meaning of true bravery.

The movie Brave was released in cinemas in June 2012. I finally watched it for the first time in June 2014 lol I admit I rarely buy into the whole 'must see' hype that is movies and tend to wait till the hype has died down and the movie all but forgotten before I get around to watching. I do this because I do not want my expectations of a movie to be so high from the hype that the movie fails to deliver.

Sometimes though, you shouldnt wait. For example, this time I shouldnt have waited. There were many moments during this movie that would have been awesome to see on the big screwn. However in saying that, there were many moments miss 7 also head her head and said she did not like it, or was scared of it. I however loved it. What a fantastic movie. A little humour mushed up with some seriousness with a dab of lice thrown in. It was fantastic.

I liked the story line, I liked the characters (especially the beautiful red hair), and I liked tha animation. I am quite a fan of kids/family movies so was delighted this one was not a let down. We hired it from the video store but I wish to now purchase a copy on dvd to add to our collection. I highly recommend this movie to everyone.

Brave is one of those Disney films that attempts to break the stereotypical gender roles that their movies in the past have left engrained in our minds. Busting the myths of marrying who your parents want, for the good of the family. Although widely prevalent in the past, almost all cultures have forgone these traditions and allowed their children to marry whomever they want, whenever they want.

Brave is a delightful movie, that is an exciting watch for all. Although the initial plot may appear boring for boys, the consequent battles and supernatural events will be sure to keep their interest.

This film does a lot to show the harm that hatred can cause, whether unintentional or not, and encourages forgiveness and more importantly, understanding of others. The imagery is extensive, with the environment adapting to the changes in mood, from light, to dark, and back again.

One could say that this film casts light on the barbaric and unnecessary nature of men and hunting. With the shoot first ask questions later approach causing many problems throughout the movie. At may have been an unintentional comparison, but as a person who disapproves of unnecessary killing and unsustainable hunting, it was a theme that I was pleased to see.

When I saw the trailers for Brave I knew that it was one of those films that I HAD to see. Due to time and money constraints I didn't manage to make it to the cinemas to watch this, as I had originally hoped to, but I did borrow it not long after it came out on DVD and enjoyed it so much that I then bought a copy of my own.

This is the type of movie that we need more of. Merida is her own person, who doesn't want the typical princess life and she isn't spending the movie fawning or chasing over a love interest, which was so refreshing as most princess movies she is looking for her one true love. Instead this largely centres of Merida, her yearning for a life outside of marriage and her relationship with her mother.

This is a great family film, I was concerned that my kids might get a bit scared in a couple of scenes but they didn't and really enjoyed it overall, my son and my daughter wanting to re-watch it and take turns playing Princess Merida. This has a few great actors in it, and they all add a great deal to this film.

If you like a princess movie that has a head-strong lead who knows exactly what she wants and isn't afraid to fight for it, then watch this.

We went to see Brave at the theatre during the school holidays. I couldn't wait to see it with my daughter. Merida, the main character, was the sort of princess my daughter could relate to. Head-strong, with goals and dreams outside of the girly norm.

The only thing I worried about was the lead actress' accent being quite thick. I didn't need to worry at all. I could understand what she was saying. This movie has everything! A great storyline, with magic and adventures aplenty. It was a surprise because the trailer doesn't elude to the story as much as you might imagine.

The characters are funny and flawed. There's great comedy, and some tear-jerking moments too. The computer graphics are wonderful. They have come so far with hair and fur rendering. Merida's beautiful hair is a testament to those artists working in the field.

I loved the mother daughter relationship being explored. It left us hugging in the theatre. Can not wait to get this on DVD next.

This is the best Disney movie I have ever seen, the lead character captures your heart with her tenacity and spirit. She is not a typical Disney lead character, she isn't tidy, and dressing prettily is not on her top ten to-do list.

The movie itself ticks so many boxes, it's almost impossible, to not sound like Disney has asked me to write this! It is very funny, it is a little scary and it even has that touching Disney moment that makes you tear up!

This movie will appeal to both boys and girls, and to all members of the family, I brought my children 15, 10 and 6 and they all really enjoyed themselves, we have decided that this is a must purchase movie! I highly recommend this as a movie that the whole family will enjoy again and again.