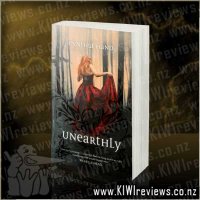 Disclosure StatementFULL DISCLOSURE: A number of units of this product have, at some time, been supplied to KIWIreviews by HarperCollins or their agents for the purposes of unbiased, independent reviews. No fee was accepted by KIWIreviews or the reviewers themselves - these are genuine, unpaid consumer reviews.
Available:
January 2011

Clara has known she was part-angel ever since she turned fourteen two years ago, but only now is her purpose - the crucial rite of passage for every part-angel - becoming clear to her. Clara's purpose leads her family to Wyoming, where, amidst terrifying scenes of a bush inferno, she finds the boy of her visions, Christian. He is everything she could wish for - so why does she also have feelings for her enigmatic classmate Tucker?

Clara discovers that her purpose is only a small part of a titanic struggle between angels and their destructive counterparts, the Black Wings. And when the fire of her visions erupts and both Christian and Tucker are in danger, who will she choose to save?

From debut novelist Cynthia Hand comes a riveting tale full of supernatural powers, forbidden romance, and the choice between fulfilling your destiny or following your heart.

Hmm, an Angel version of the "Twilight" series is pretty much what I thought when I first read the blurb on the back of "Unearthly"... this book is already not looking like it'll be all that good. A few pages into the book, and I was already finding it a somewhat uncomfortable read, due to the amount of short sentences, done in first person, that felt rather stuttery and really didn't run together very smoothly, yet I continued reading.

It wasn't until I was about a third of the way into the story when I realised I was hooked... totally and utterly hooked, no longer even noticing that disjointed feeling I'd felt when I first started reading. Every moment I had to spend away from the book had me itching to dive straight back in, all the while wondering just what was going to happen next. Yes, there's still a hint of that Twilight feel, with its supernatural romance and a love triangle, but that aside, it's still a captivating, easy-to-follow storyline with strong, likeable personalities, several of whom have a rather mysterious past that will hopefully be revealed more in book #2, and a twist at the end that had me seriously wishing book #2 was already out!

It's hard not to like the independent Clara who is still coming to terms with learning she is a Quartarius (Quarter-Angel), has powers, and a heaven-sent purpose that will take over her life, causing her to move cities and be thrown into a love triangle with the boy from her vision - the one who her life's purpose is all about, and the "annoying brother" of one of her new best friends who she finds herself totally falling for. No longer is she in control of her own life, or her own body at times, which can make things rather difficult to settle into her new school.
Then there's the intense, mysterious Angela, also an angel-blood, who is extremely keen to help Clara fulfil her purpose... yet there is something not quite right about her. I have my theories, But I look forward to reading the rest of the trilogy to see just where Ms Hand takes this particular character.

However, the character who intrigues me the most in this book would definitely have to be Clara's mother, Maggie. She is extremely tight-lipped about her own purpose, her past, and many things about being an angel-blood that her daughter would love to know, which makes me wonder just what secrets are hidden in her past, and how long I'll have to wait to have them revealed.

Book #1 has definitely set the scene well for what could turn into an interesting trilogy, and ends with a twisted cliffhanger that will make waiting for the 2nd book an impatient task, especially as there are a lot of hints dropped along the way that leave you with questions.. questions that again will have to wait until book #2 or #3 to be answered.

A great first novel for Cynthia Hand, and one I'd recommend trying if you enjoyed the Twilight series, or just enjoy supernatural books and/or romances.

When Samuel, a free black orphan, speaks up for his unfairly accused younger brother, his life is turned upside down. Taken away from the only family he has, Samuel, now christened Friday, must make sense of his life as a new slave. Working at a ranch as a corn picker, becoming involved in the terrible fighting, and living among strangers. Samuel is determined to find his younger brother, and despite enduring horrors during his journey, he ... more...