The Good, The Bad and the Undead review 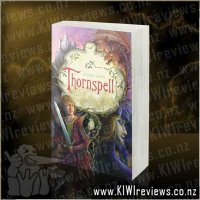 Disclosure StatementFULL DISCLOSURE: A number of units of this product have, at some time, been supplied to KIWIreviews by Penguin Random House or their agents for the purposes of unbiased, independent reviews. No fee was accepted by KIWIreviews or the reviewers themselves - these are genuine, unpaid consumer reviews.
Available:
July 2010

Prince Sigismund has grown up hearing fantastical stories about enchantments and faie spells, basilisks and dragons, knights errant and heroic quests. He'd love for them to be true - he's been sheltered in a country castle for most of his life and longs for adventure - but they are just stories. Or are they?

From the day that a mysterious lady in a fine carriage speaks to him through the castle gates, Sigismund's world starts to shift. He begins to dream of a girl wrapped, trapped, in thorns. He dreams of a palace, utterly still, waiting. He dreams of a man in red armour, riding a red horse - and then suddenly that man arrives at the castle!

Sigismund is about to learn that sometimes dreams are true. That the world is both more magical and more dangerous than he imagined. And that the heroic quest he imagined for himself as a boy... begins now.

The tale of Sleeping Beauty is usually about a baby princess who is cursed to die by an evil witch because her parents 'forgot' to invite the nasty old lady to the babe's christening. Fortunately, her good fairy godmother twists the spell to a 'sleep of a hundred years' rather than death, and just for good measure, she throws in a clause about 'only waking when kissed by the chosen prince'. No one ever wondered how the prince felt about this whole arrangement.

Now, finally, we get to read Prince Sigismund's side of the story. Having finished the book, I am left wondering how the original story could ever have been told from the princess' point of view, as she spends most of the story asleep!

In all seriousness, however, Thornspell is a great fantasy. Targeted at children and young adult, author Helen Lowe keeps her story true to the fairy tale while incorporating likeable characters, old English myth and a vivid setting full of magic. For a story I thought I knew, Thornspell still managed to pleasantly surprise.

"The body you are wearing used to be mine." So begins the letter Myfanwy Thomas is holding when she awakes in a London park surrounded by bodies all wearing latex gloves. With no recollection of who she is, Myfanwy must follow the instructions in a series of letters her former self left behind to discover her identity and track down the agents who want to destroy her.

She soon learns that she is a Rook, a high-ranking member of an ... more...