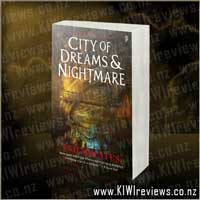 Having witnessed a murder in a part of the city he should never have been in, street thief Tom has to run for his life. Down through the vast city he is pursued by sky-bourne assassins, Kite Guards, and agents of a darker force intent on destabilising the whole city.

His only ally is Kat, a renegade like him, but she has secrets of her own...

It's not too often I come across something totally new, and in the 'fantasy' genre as well, that can grab me in the same way as one of my perennial 'sci-fi' favourites. This offering from Ian Whates was one such 'new favourite' in the making I suspect.

The story starts of slightly vague, drawing the reader into the story 'just until you understand why...' by which time, of course, you are hooked. Tom is a wonderful character, with abilities beyond the norm for a 'street-nick' like him from the lowest levels of the City Below - though not, as it transpires, much more than purely commonplace for those of the higher reaches of Thaiburly, such as the Arkademics and Masters. As the book progresses, Tom begins to trust in his abilities, and use them effectively instead of haphazardly, and from this begins to realise his importance in the complicated dance of destruction going on around him.

Kat has secrets of her own, darker more bloody secrets, which get revealed as the plot progresses... despite the depths of her that get revealed, I have to wonder how big a part she's going to play in the ongoing saga.

Overall, this gives me the same feeling I got when I started to read the Mortal Engines series: Something big in the making, and this is just the quiet beginnings. The 'supernatural' aspect is well played, with it being integrated as a function of the city itself, rather than some form of supernatural, external power... the twists and interconnected plots are amazingly well done and though predictable at first, soon devolve into a far simpler, but far less predictable web of doublecross and deceit. An auspicious start to something that shows all the hallmarks of an astounding series in the making.

An intriguing illustrated guide to the life and death of the creatures that dominated our planet for 160 million years.

•  Introductory chapters survey dinosaur anatomy and bahaviour, fossil evidence, and the death of the ... more...