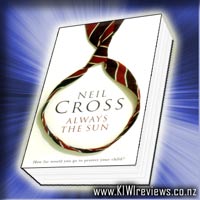 Disclosure StatementFULL DISCLOSURE: A number of units of this product have, at some time, been supplied to KIWIreviews by HarperCollins or their agents for the purposes of unbiased, independent reviews. No fee was accepted by KIWIreviews or the reviewers themselves - these are genuine, unpaid consumer reviews.
Available:
May 2004

What would you do when your child is bullied?
How far will you go to protect them?

Jamie is thirteen years old, an only child. His mother has recently dies. He and his father Sam have moved to Sam's home town. A fresh start. A new job for Sam, a new school for Jamie.

But one day Jamie comes home bearing the scars of every parent's worst nightmare. Something must be done.

As a father myself, I can understand Sam's problem... after all, his wife is dead, so he has no moral support other than that of his somewhat-messed-up sister, her ex-husband (who's a little on the strange side himself in more ways than one), and the tenuous support offered by the parents of Jamie's best mate, Stuart. All summed up by the phrase 'sod all really.'

When you son is being bullied, the natural instinct is to go stop the little sod who's hurting your precious child... stop them, that's all, just stop them, by whatever means required.

I honestly don't know if I would go the extremes Sam did, but I can empathise with him throughout it all.

At the end, when Sam's world falls apart, he falls into another situation I know from personal experience, that deep, all-pervading depression that makes time race by outside your little world. The entire universe shrinks down to the confines of your chosen hole-to-hide-in. In that new universe, time drifts, and the world doesn't matter, because it's just a bad dream you have to encounter sometimes when the fridge gets empty.

This is a truely thought-provoking story, told in a most unusual way... slow start, big finale.

Overall, this book scared the hell out of me. As a father, as a man, and as a member of human race. It shows us how far down we can go and yet still undeservedly claim to be a civilised member of the human species.

Cartoons have been an essential feature of The New Yorker since the magazine's founding, in 1925, lovingly devoured by readers, clipped, collected, shared, and remembered. Viewed together - as they can be here, for the first time ever - they form a comic chronicle of American life and times, eight decades of vibrant, concise, and up-to-the-moment commentary on subjects ranging from the mundane to the magnificent. And let's face it - they're ... more...