Goosebumps: The Stories Are Real review 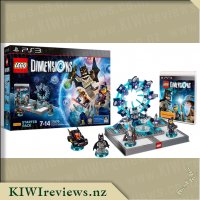 When a mysterious and powerful vortex suddenly appears in various LEGO worlds, different characters from DC Comics, The Lord of the Rings and The LEGO Movie are swept away. To save their friends, Batman, Gandalf and Wyldstyle bravely jump into the vortex and quickly find themselves fighting to save all of LEGO humanity.

Let creativity be the guide to a building and gaming adventure - journey through unexpected worlds and team-up with unlikely allies on the quest to defeat the evil Lord Vortech. Play with different minifigures from different worlds together in one LEGO videogame, and use each other's vehicles and gadgets in a way never before possible. LEGO Bad Cop driving the DeLorean Time Machine...why not?! The LEGO Ninjago Masters of Spinjitsu fighting alongside Wonder Woman...yes, please! Get ready to break the rules, because the only rule with LEGO Dimensions is that there are no rules.

There is an ancient planet at the centre of the LEGO Multiverse inhabited by an evil mastermind, Lord Vortech. It is said that he who controls the Foundational Elements that this planet is built upon, controls all of the Multiverse. Lord Vortech has vowed to be that ruler, summoning characters from a variety of LEGO worlds to help him find these building bricks of LEGO civilization. Some have agreed. Others have rebelled. And only the combined powers of the greatest LEGO heroes can stop him.

When a mysterious and powerful vortex suddenly appears in various LEGO worlds, different characters from DC Comics, The Lord of the Rings and The LEGO Movie are swept away. To save their friends, Batman, Gandalf and Wyldstyle bravely jump into the vortex. As they journey to locations beyond their wildest imaginations in search of their friends, they soon realize that Lord Vortech is summoning villains from across different LEGO worlds to help him gain control. As his power grows, worlds mix, unexpected characters meet and all boundaries are broken. Our heroes must travel through space and time to rescue their friends before the vortexes destroy all of LEGO humanity.

Features:
•  An Extreme Cross-Over. For the first time in any LEGO videogame, characters from a mix of some of the best brands in the universe join forces and battle in worlds outside of their own. A Dark Knight, a Wizard, and a LEGO Master Builder travelling together down the Yellow Brick Road is just the beginning...
•  Keep Expanding. By purchasing additional expansion packs, players can grow their collection with a variety of their favourite brands to create even more crazy combinations. More is Better. Bring up to seven minifigures, vehicles and/or gadgets into the game all at once by dropping them on the LEGO Toy Pad for the most exciting and action-filled game around.
•  Play Alone or with a Friend. Players can let imagination guide their solo journey or have a friend join the adventure with co-operative, drop-in/drop-out play.
•  The Starter Pack Will Last. The LEGO Toy Pad and the videogame found in the initial Starter Pack will offer continued compatibility with future Expansion Packs for years to come. Like any LEGO building set, LEGO Dimensions is a system of play that offers continued compatibility - everything bought today or expanded with tomorrow will continue to work.

**The Toy Pad is wired with a USB cable that will connect to the USB port on the console. The length of the Toy Pad cord is 8 feet or 2.43 meters. A USB extensions cable (not included) can be attached for additional length.

We'd tried Disney Infinity but in the end found it a bit too hard to continue playing, when I saw ads for this, I knew it would be done well and a huge drawing card was a Doctor Who level.

Now the first and main thing to remember, as it does tell you each time you start the game, do NOT put the base on anything metal, as my son discovered, it really does stuff up the game and only one area will work, essentially rendering the game unplayable. You may also need to rearrange furniture because you need to be within arms reach of the toy pad for game play, that or have your younger player moving things at your bidding.

There a good number of levels to play here, the kids had a blast seeing some of their favourite characters involved such as Scooby Doo and the Doctor, and even enjoyed a retro game themed level. My personal favourite had to be the Doctor Who level which threw in some fab enemies such as the Cybermen, Daleks and Weeping Angels. The level even spooked out the kids a bit as we get surrounded by Weeping Angels and then the lights flicker off and on, if you know Doctor Who you know the threat that brings with it... my son went gaga over the Ghostbusters level, a big favourite at the moment, a great variety of levels and characters.

There are a few little puzzles along the way, within the game, that add extra work to the game. There are times when you must move your character around on the toy pad (which is where the young helper comes in handy) in order to grow, shrink, fire, water, electricity etc. There was one particular mini puzzle, that ended up proving a little difficult the harder that it got, where you need to stand on pads in game to make the pads on the toy pad change colours, fun, but it got hard as there were a few times where it was hard to tell exactly what colour it was meant to be ie. Purple looked very much like bile, and orange looked very much like red...

The downside to this game, is that if you wish to complete the game to 100% you will have to buy the other character sets (there are level packs, fun packs and character packs, so ensure you check which is which before buying) but in many places you can "hire" a character for coins, for 30 seconds, someone you have a decent amount of money this is a possibility. The levels follow the characters well and most fit with the characters well, though some seem a bit too out of place (such as bits from Doc Brown and Marty) but there is so much fun here to be had and plenty going on outside of the levels.

I'm thoroughly enjoying playing this with my kids, though it can get a bit expensive, it's giving enough that I'm not seeing it too differently to buying a whole new game. We're slowly collecting the available characters and do look forward to seeing what characters come out next, though wait for it to be on special, not full price.

Nobody puts princess in a tower! Sparkle*Kitty is an adorably fun, social, and magical spell card game for all ages, sizes and genders. Once upon a time, a group of powerful princesses were captured and locked away in Cursed "No Cursing" towers by the evil queen Sparkle*Kitty!

All their words and magic spells vanished and became sugar & spice... almost everything nice. Luckily these are no ordinary princesses and you are no ordinary ... more...