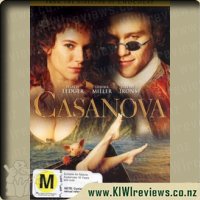 "Casanova" is a delightful comic farce with frequent sight gags and Punch and Judy-type puppet shows broadly commenting on the action, though it took four writers to stitch together the broad double entendres and winks at Shakespeare.

Heath Ledger does a great job as Casanova. One of the cute things about the film is that the women are the aggressors here, not a man, Casanova modestly claims that his success is solely due to his ability to submit. There is lots of fun about as he plays several roles, trying to keep himself out of the church's grasp, whilst being engaged, pretending to be another person (as he falls in love) and so on. Enough comedy going on just fro Ledger.

Miller seems a bit young for her role at first, but as a philosopher defending the rights of women does a great job and youth makes her earnestness seem more charmingly naïve. As her lively mother, Lena Olin provides the older woman ballast, without the usual sex-starved widow stereotypes, always a plus in my books. Jeremy Irons is wonderful as the Inquisitor from Rome. The look of the film is gorgeous, I really want to go to Venice, with gondolas and canals, steps, plazas, architecture, roofs, narrow streets, alleys and the light.

All in all this is a fun movie, and the soundtrack is wonderful.

Founded in 1910 just outside of the city limits of Gilbert located in Lanville County, Texas, the Chicken Ranch has for generations been known as the best whorehouse in Texas for its wholesome fun, strict moral code and cleanliness, all perpetuated by its original owner, Miss Wulla Jean. Seven years ago, Miss Wulla Jean passed on, leaving the Chicken Ranch to her favorite working girl, Miss Mona Stangley, who wants to keep the same traditions of ... more...