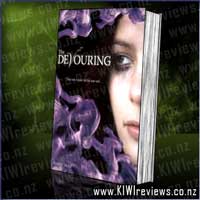 THE VOURS: Evil, demonic beings that inhabit human bodies on Sorry Night, the darkest hours of the winter solstice.

When Reggie reads about the Vours in a mysterious old journal, she assumes they are just the musings of an anonymous lunatic. But when her little brother, Henry, begins to act strangely, it's clear that these creatures exist beyond a madwoman's imagination, and Reggie finds out what happens when fears come to life.

To save the people she loves, Reggie must learn to survive in a world of nightmares. Can she devour her own fears before they devour her?

The Devouring is an engrossing tale of terror that will have you wondering: what if your worst fears became your living nightmare?

It caught my eye because its something fresh. The whole vamp, were, shifter, para stuff I normally read has been hashed out and its becoming a struggle to find something 'new'.

So the main character, Reggie - a teenage girl - finds a scary story in a strange old book, reads it to her little brother Henry and unwittingly lets the Vours (fog like entities) into their lives.

Unfortunately the story, for me stagnates for a while before the action starts. But once it does, boy does it ever - in a very 'old school' Stephen King, Dean R Koontz kinda way (reminiscent of such classics as 'IT' and 'The Funhouse') If you are afraid of clowns it may not be for you!!!!

In the end it made up for the midway slump although the side character of Eben (an elderly man seemingly too eager to help) initially gave me the creeps, his role was somewhat revealed towards the end.

All in all, a great read and a new spin on the body snatcher theme

Harry Wakatipu returns to the Hopuruahine Hut and out of the mythical mists of the bush, the Grey Ghost fires his .303 from the hip, learns his dogs walk on water, slays the first of the Grim Inscrutable Wolves and lives all winter on a single moa's egg.

What happens when a flying dunny lands in the river bed, when Harry Wakatipu ferments condensed milk? Tuck this book under your swanny and listen and laugh to the muscular music ... more...