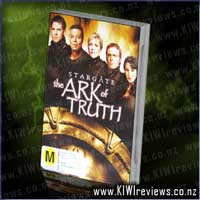 Disclosure StatementFULL DISCLOSURE: A number of units of this product have, at some time, been supplied to KIWIreviews by Roadshow (NZ) Ltd or their agents for the purposes of unbiased, independent reviews. No fee was accepted by KIWIreviews or the reviewers themselves - these are genuine, unpaid consumer reviews.
Available:
April 2008

This thrilling feature-length film picks up where Stargate SG1 left off, thrusting the Stargate team - Daniel Jackson, Vala, Teal'c, Sam and Cam - into their most exciting adventure yet.

In search of an Ancient artifact they hope can defeat the oppresive Ori, the team learns that the Ori are set to launch a final assault on Earth and a double-crossing I.O.A. operative aboard the Odyssey puts everyone at risk from not only the Ori battlefleet, but also another unexpected front.

Having been an avid follower of Stargate since the initial movie way back in 1994, I was overjoyed to see another feature length movie based on this franchise. Filling in the story where Stargate: SG1 overlaps and passes the baton to Stargate: Atlantis, this was a great movie in my opinion, simply because it addresses a few loose ends that the writers obviously weren't able to tie up in the alloted time, without cramming the story with plot-jumps.

With a hybrid team from the SG1 and Atlantis seasons, it was good to see Daniel and Sam again, along with the ever-reliable Teal'c and his dry-to-desiccated sense of humour. However... as so many other sci-fi stories has suffered, so too has the Stargate franchise suffered cast-bleed...

"Say what? Wassat?" Well, cast-bleed is where you end up getting multiple actors from a popular series joining another 'running' story... because they have simply become typecast as sci-fi warriors, scientists, whatever. In this case we see Ben Browder and Claudia Black, both from the semi-popular series "Farscape", reuniting as a mismatched team... the irony being that though this time Ben is still playing the human and Claudia is still playing the alien... now it's OUR universe SHE is stranded in... Oh the huge plot developement there... how ever do they come up with this stuff!

Never the less, discounting the odd corny characterisations, the story fits well with the cross-over plots developed in both storylines... that is to say, a little tactless and free of style in places, but otherwise much as one would expect from a story-universe that is well into it's second decade of development... so far humanity has pretty much destroyed the entire Go'auld powerbase (not to mention the species itself), has wiped out the replicators (with help from the now-dead Asgard), has managed to leap over to another galaxy and seriousl annoy the resident evolved-parasite species, the Wraith, destroy a race of nearly-omnipotent ascended beings, the Ori (with help from a long dead Alterran, Merlin), and is now in the final stages of wiping up the leftover mess... and that's where this little gem comes in... the hunt for the Ark of Truth, a device that undoes the brainwashing put in place by said nasty demi-gods, the Ori.

Do I sound a little cynical? My apologies... seriously, the movie is actually pretty good on the whole... predictable in some places, utterly not in others... the special effects are spot-on and the plot will keep you guessing... unless of course you are a die-hard fan and have long since passed this point in the story and are well aware of where the plot stands at the other end of this movie. Still, it's nice to fill in the gaps with a bit of action and a few surprises, eh.

Overall, for the fan, an absolute must-have... for those looking for a good stand-alone movie... stick with the original, it sits better as a 1-off... this one is more in line with the Babylon 5 movies that bridge gaps in the overall story, rather than being like the Star Trek movies which pick a story and run with it as a free-standing bit of entertainment.

Anton continues to fight the forces of Darkness while simultaneously attempting to find and save his son from the clutches of those same forces. But when Dark Others start ... more...