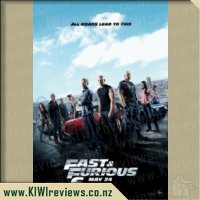 Meanwhile, Hobbs (Johnson) has been tracking an organization of lethally skilled mercenary drivers across 12 countries, whose mastermind (Evans) is aided by a ruthless second-in-command revealed to be the love Dom thought was dead, Letty (Rodriguez). The only way to stop the criminal outfit is to outmatch them at street level, so Hobbs asks Dom to assemble his elite team in London. Payment? Full pardons for all of them so they can return home and make their families whole again

This is a movie everyone expects great things from prior to watching. For good reason, there are 5 prequels that are one better than the other. While not the most believable actions, watching it you won't care as you will be caught up in the action and cars and it will have you at the edge of your seat. I highly recommend this movie not just for the car folk out there, but for anyone who can appreciate a bit of action. Although you will highly enjoy it if you're a car guy.

Another great thing about this movie is that while it follows a story line, it is not necessary to have seen the previous movies to enjoy it. You may be at a loss with some references, but it will not affect the over all experience of the movie as this movie has it's own story, alongside the main story that goes through out the 6 movies. While I will not spoil, this movie did one of the best connections to an older film in the series I have ever seen. The way it links to a previous movie in the series will make you wonder how long prior to this movie being made the stories had been set out and that should be celebrated.

Over all this was a great movie, lots of action, lots of drama with characters you can relate to. While it does get hard to believe at some stage when you think back on it, it only enhances the experience of the movie.

The sixth installment in theatrical releases of the Fast and the Furious franchise, I personally find this film to be a step down from the 'Fast Five'. With little to no reason for the crew to get back together after their last successful heist, we see the return of Letty (Michelle Rodriguez). Attempting to create another barrier for the team to overcome, a new enemy has been put together; another crew of professional criminals, that include military individuals, with some high tech gadgets.

This film gets incredibly hard to believe, and even though it is full of action, it still makes you cry out in exasperation. The ending scenes are reminiscent to the end of Die Hard 2, but far more bizarre, bordering on eccentric. This movie ends with a bit of an extended scene from the Tokyo Drift that unveils the next villainous addition for Fast & Furious 7, who is an actor that I love, who can certainly convincingly drive a car.

This movie did little for me. It seemed to be well above their capabilities, and it seemed less like them overcoming adversity and misplaced animosity, and more about them taking potshots and hoping that they hit their target. The visuals were great, as would be expected by now, but they seem to be trying to overcome a lack of ways to make the films more exciting, by doing nothing more than adding in more big stars.

Fights - girls vrs girls, boys vrs boys, giant vrs the Rock. Car chases, motor bikes, tanks, planes - this movie has everything. More OTT then ever before especially as Letty is flying thru the air, Dom jumps out of his car and flies thru the air catches her in the middle of the bridge which makes them both fly towards a parked car and they both land perfectly no bounce just a smashed window. Or when they all jump out of a speeding plane just off the ground and they all land perfectly into a car below them or when Hobbs jumps from moving car and lands perfectly on the roof of moving car and then falls off - fantastic.

Letty is alive. Turns out had amnesia and has forgotten Dom and the crew Hobbs is willing to give them all immunity so they can return to the US if they help stop this bad dude who also races car and steals things.

The movie is a great no brainer. It is bitter sweet though because in the back of your mind your thinking this is the second to last time you will see Paul Walker as he died during the making of the 7th Fast and the Furious. It is weird watching him walk away from car accidents and seeing car explode with no casualties - if only true life could be like the movies.

It also finally brings the 3rd movie made in the franchise into light. Tokyo Drift. As the credits start to roll you see Han racing the streets of Tokyo and exploding in his car. Then Jason Statham calls Dom. To be honest I don't remember Jason being in Tokyo Drift - but looking forward to it, although going to be extremely sad knowing Paul is no longer. They did do a lot of drifting in this movie.

I love how you can watch a movie and just enjoy it. The choreography of the fight scenes was really good especially between Letty and Riley. The story is just silly but yet its enjoyable, even if my husband is yelling obsceneties at the tv. If you love Fast and the Furious movies you will love this especially the stunts.