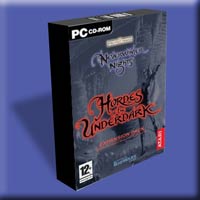 Neverwinter Nights, the award-winning fantasy game experience, celebrates the power of DUNGEONS & DRAGONS with an expansion pack of truly epic proportions. The subterranean Underdark, one of the most popular and awe-inspiring worlds in the history of D&D, has now been reawakened within the Neverwinter Nights universe.

For the first time, characters can achieve Epic status (up to Level 40), while braving an all-new, 20-hour single player campaign. Epic feats, spells and creatures -- along with underdark tilesets and new prestige classes -- expand Neverwinter Nights yet again, inviting fans into a classic D&D realm.

Neverwinter Nights ... a world without limits!

Hordes of the Underdark is the second expansion for the Neverwinter Nights game and takes place after your adventures in the first expansion, Shadows of Undrentide.

Your adventure begins in the besieged city of Waterdeep, and of course you must save the day. Your quest will take you deep into Undermountain and the Underdark where you get to kick loads of drow butt, what could be more fun.

If you thought the first expansion was a little thin on new features, this expansion more than makes up for it. Apart from the normal addition of new feats, spells, monsters, weapons, and items, you now have the ability to take your character to the lofty heights of hero extraordinaire with the introduction of epic levels. In english, that simply means you can now take your character all the way to level 40.

Hordes adds six new prestige classes to those introduced in Shadows of Undrentide to give you more multiclassing goodness than you can shake a goblin at. Extend your fighters skills with the awesome abilities of the Weapon Master and Dwarven Defender, or take your Druid's shapeshifting abilities to all new heights with the Shifter, holy warriors become beacons of godly might when choosing to be a Champion of Torm, and spell casters aren't left out either as they can gain the abilities of the Red Dragon Disciple and Pale Master.

Crafting is a new feature introduced in Hordes and with it you're able to craft scrolls, wands, potions, non-magical weapons, armor, and items, and customize the look of your characters armor and weapons, so long as you have the appropriate skills and/or feats.

Those who like to have a mercenary in tow will be pleased to know you can now have two of them for double the fun. Several of the mercenaries from the original game make an appearance along with your faithful kobold friend from Shadows of Undrentide, all of whom are ready to help crack some skulls.

The graphics have also gotten some attention, the most obvious of which is the introduction of robes which definitely add a new dimension to your characters, especially the spell casters who now look the part. The camera has also had its view limitations eased a little and now allows you to look horizontally, its zoom limits have also been increased and when zoomed in completely and looking horizontally you can almost get a first person look at the world. If that wasn't enough, they've also added skies for you to look at.

As with Shadows of Undrentide, everything included can also be used in the original game except for the mercenary inventory control and crafting. That means you can create a new character and replay the original game with access to all the new goodies.

Overall, a massive expansion that's a must have if you enjoy this game.

Eight crime stories written in the fascinating, compelling style of the hit TV series. Behind the sun, surf and palm trees lurks a darker world. You will quickly learn that each suspect is capable of deceit. By rolling the special die you will follow the evidence, identify the killer, and reveal the truth.