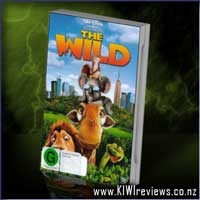 Disclosure StatementFULL DISCLOSURE: A number of units of this product have, at some time, been supplied to KIWIreviews by Roadshow (NZ) Ltd or their agents for the purposes of unbiased, independent reviews. No fee was accepted by KIWIreviews or the reviewers themselves - these are genuine, unpaid consumer reviews.
Available:
February 2007

When a funny band of furry friends escape from the city zoo, they discover that New York City is the biggest, craziest jungle of all. Bursting with special features, including a hysterical bloopers and blunders reel, deleted scenes and more, The Wild is ferocious fun for audiences of all ages.

Though I didn't think this was 'the best thing since sliced bread' I had to admit, I found myself laughing at some of the alternative layers... things that kids might not pick up on... such as Nigel the Koala, voiced by notoriouos cross-dressing comedian Eddie Izzard, turning up in a scene wearing feminine clothing and commenting on how much he likes it... and of course the antics of the chameleon secret agents...

Some big surprises for me were the vocal talent themselves, such as James Belushi, Kiefer Sutherland, Janeane Garofalo and William Shatner... just to name the major cast... I didn't recognise many of them! I never would have picked Ol' Captain Kirk playing the part of Kazar, the big bad Wildebeast head honcho... shocking revelations indeed!

The plot was nothing special, but the movie held it's own against some of it's competition... which is hard to do with so many CGI 'toons flooding the big screen at the moment, so I guess this one is quite a goodie. Layers of typical Americanised slapstick for the kids, some not-so-obvious high-brow humour for us Colonial Offspring, and some pretty good CGI work make this one rise above most of the pack to showcase some good talent.

This is Steve Williams' first stint as Director, after many years in the Visual Effects department on some blockbuster movies, and it's certainly not the worst debut I have seen... it was quite a fun coming-out in fact.

overall, despite some 'flat' patches, this is a very good movie, and speaks to those men trying to come to grips with being a solo father during the formative years when the son needs you to be something more than who you are... it's a tough time, and this movie has within it a dramatised metaphor for some of the toughest times in a father's life.