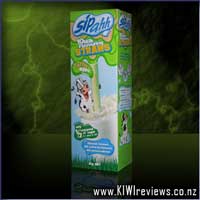 Wow, this was a truly strange flavour... got a lot of apple taste and very little toffee (unfortunately). I liked it mostly, it had some resemblence to apple crumble with cream, just wouldn't have it often.

Though these are just as effective as the others in the range I wasnt too impressed with the flavour. I dont think apple goes well with milk. Not at all close to being a favourite, but it was an interesting experiment for sure.

This would have to be my least favourite flavour of the family. I found neither of the tastes strong enough for my palate, and maybe even the fairly plain taste of the rice milk simply overwhelmed the product. Having said that, I could (maybe with imagination) differentiate the differing flavours.

Whilst one can definately taste the apple part of this combonation there was a distinct lacking of the toffee flavour. I was somewhat expecting it to taste like the toffee apples one gets from most fairs/outdoor events, however it was more like the tangy apple flavouring of certain lolly varieties.

While this loses some points for taste it does make these up in the effectiveness department as it is a very unique and I must say smart way of flavouring your milk products, these are very handy to have in the car for the kids to shove into a small container/bottle of milk when your out on a long journey, or they are just getting plain thirsty, but don't want plain old milk or water.

to the guys at UNISTRAW for coming up with this.

An unusual combination of flavours to add to milk. Indeed it flavours the milk but I found it was so sweet I had trouble finishing a whole glass. There was, I thought, a slight apple-ey smell but that could have been an olfactory hallucination on my part. As for an apple taste, it was so slight as to be absent.

I do like the straw design, the holes for the milk to travel through the UniBeads is well thought out. The price is a little high but it can be worth it to get the kids drinking their daily milk.

Not really sure I will be going out and getting this flavour, but that is only for this flavour.

I must say, this has been the most disappointing Sippah yet.
Indeed it DID flavour the milk, a noteable flavour, it was a flavour I couldnt specifically point out to be the advertised TOFFEE APPLE. To me it tasted like tangy Caramel.

Now the overall layout of the Sippah is ingenious, the straw, with little venty bits at the top and bottom for the milk to flow through, and subsequently pick up the flavour from the Beads on the inside.

Now, Value for money... This one is hard to choose, as there realy isn't an equivalent on todays market to match this, but it is an acceptable, if a little high, amount to pay for 10 glasses of milk. Before we even have milk.
There was a taste, distinctively different to the regular milk, but it loses three points as I couldnt really define it as toffee apple. Too tangy.
Effectiveness gets a nine because the overall product DID do it's job.
Personal Choice, as a product it did do it's job, but as previously mentioned, taste let this product down.