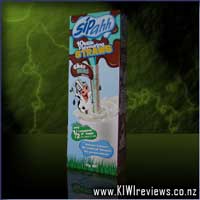 These are such a fantastic invention. My son who drinks rice milk LOVES these, it allows him to have a 'fun' flavour of milk, whilst not upsetting his dietary needs.

I added the straws to the treat box, so when he gets a treat he could chose to use one of these, this worked so well and ends up to be a pretty healthy treat .. these were on the top of his list as fun to drink through.

This was his favourite flavour, and mine too! (Just dont tell him!) They are not really 'cheap' and as you add the price of milk to it, its definitely not cheap! But overall i think this is a great treat product that kids love! (and isnt messy!)

I can not find a full box of these in the supermarket. But I found it in a 5 straw multiple flavour pack! This is the one I steal (shhh, dont tell my 4 year old).

The smell of the flavour seeds is so yummy, and I can have it with my super trim milk. Its so yummy and feels a bit naughty (not just because I stole it from the pack).

I also like the fact that I can drink a hot drink through it to add to a Milo and I can get more than one drink out of it.

This flavour was really good! I didn't know whether or not I would like the choc-mint combination, but I was pleasantly surprised.

I love the idea of these straws, they are portable and convenient. As a previous reviewer mentioned they are GREAT for dairy free diets. My partner is lactose intolerant and loved these straws.

I did find it hard to judge how much to sip to get the most effective mix of flavour and milk. A lot of my milk ended up being plain for some strange reason, and I had beads left at the end in the straw. I guess its one of those things you learn with practice!

This would be the best flavour in my opinion
Easy to use straw that kids love.

Wasn't too sure what to expect before opening the Packet. Thought maybe a carefully measured amount of flavoured powder, but was pleasantly surprised. The kids can make their own milk shake with these with no mess and no hassles. Great product!!

I REALLY liked this flavour, far more than I thought I would. Once I got the flow rate sorted out the flavour came through at a really tasty level and the results were quite nice. I would not have normally thought that mint and milk would go together but they do when you add the choc.
Quick, easy and simple to use, the biggest learning trick is suck at about the same rate you would a thickshake, otherwise you end up with plain milk or flavouring beads left over at the end, and the experience isn't as good as it could be.
Well worth the wait until it appears on our shelves here in NZ, so keep your eyes open for it.

As I have said about other reviews of these sipahh straws, I think they are great and have so many uses. The design of the straws is simple yet, oh so effective.

This particular flavour was not really my most fave though. It had the choc flavour I was expecting, but I couldn't really taste much mint. I may have let my thirst over reach and sucked more milk than flavouring.

It is a really sweet flavour. While I have a sweet tooth, this flavour was a little too much for me.

Hmmmmm Choc Mint, this is one of my favourite flavours when it comes to chocolate and ice cream and I found that this was no exception. I could quite clearly taste the choc and the mint and it was a very nice mix in my opinion.

I look forward to buying more of this flavour to satisfy my choc mint cravings...

I don't like Choc Mint anything normally, which is why this flavour surprised me - it was delish! Would thoroughly recommend this to even those that don't tend to like choc mint flavouring.

Mmmmmm yum.
ChocMint seemed like an interesting concept, but as a fan of mint-flavoured dark chocolate, I thought I would give it a go.

A Rip (of the packaging), Dip, and Sip later, I was overwelmed with a suprisingly realistic taste, incredibly similar to the chocolate blocks I so enjoy.
This is definitely in the runnning for favourite of the range. :)

This is certainly an interesting, novel and flavoursome product. Interesting and novel because there can be few products where you can get a jug of milk to share with friends, each grab a straw and suck - and each get a different flavour milkshake out of the jug.

The granules in the straw dissolve slowly to release the flavour - but interestingly, it seems very little colour is imparted into the milk. The milk seems to just acquire the flavour without any colours.

Trying to get the exact quantity of milk can be a little problematic - too little and you have flavour left in the straw, too much milk and you have plain milk at the end; but that is something for me to experiment with.

A simple, clever product and a devious way to get milk into your kids in a way they will enjoy.

Anything with 'choc' in the name will automatically appeal to me, even if only in theory. Thankfully, despite my unfortunate non-like (yet, not really a dislike) of the Caramel and Cookies and Cream flavours, I found this one to be quite pleasantly tasty and full of Vitamin Yum.

I was quite impressed at the near-total lack of anything that could be called artificial... basically, when it comes down to it, about the only un-natural thing would be the straw itself... and as I said in my review of the Chocolate flavour, the straw has many uses that could make it a worthy item to retain or recycle.

Overall, quite possibly my second favourite of the range, though I still have a few more to try, so...