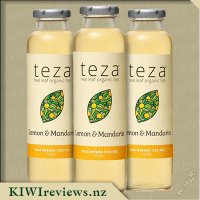 Disclosure StatementFULL DISCLOSURE: A number of units of this product have, at some time, been supplied to KIWIreviews by Greenstone Drinks Company or their agents for the purposes of unbiased, independent reviews. No fee was accepted by KIWIreviews or the reviewers themselves - these are genuine, unpaid consumer reviews.
Available:
at selected quality retailers

The Teza range of juiced teas was developed with Kiwi tastebuds in mind. Founded and now run by thirty-something couple Joe Gehrke and Daphne Raj, the range prides itself on using premium and all-natural ingredients. Real leaf tea is batch brewed with botanicals such as ginger root and then blended with real juice and best of all it is made right here in New Zealand! The emphasis of the Teza range is on 'taste' and 'naturalness' with the added bonus of looking good too.

Both the bottle and cap are recyclable, and the used tea leaves from the brewing process are sent to community garden groups and worm farms to minimise waste.

Chinese Emperors demanded that their tea be picked by silent virgins who had perfumed breath and wore new dresses and gloves everyday. This Teza is blended from the finest green tea and juice, with whispers of mandarin. Teza is all natural. Any sediment is by royal decree. Bow twice and drink.

I recently got to try the Teza Lemon and Mandarin. The taste was fairly subtle citrus, and a bit watery. The watery-ness reminded me of the Peach and Passionflower Teza. I guess, I expect a bit of a flavour hit when Iâ ™m drinking an ice tea. I donâ ™t want the fruit flavours to completely overwhelm me, but I also want them to be present to my taste buds.

With this flavour, I could kind of taste the mandarin, but the lemon flavour was strongest. I couldn't taste any of the tea flavour, but that's not unusual with these Teza teas or iced teas on the market. Overall I liked it, but I have tried several others of the Teza range and I would say this would be one of the least favourites for me. It was mostly the watery-ness that caused me to feel that way.

Very strong lemon flavor in this one, with just a very very mild hint of mandarin, and only mild, because the lemon pushes to the forefront.
I did not like it personally, as I find lemon a little too tart for my liking, however my son who loves lemon, loved this drink, and drank the lot, which I thought was pretty awesome. I like the idea that a child found the combination of tea and lemon to his liking as it is a much healthier choice than fizzy.

This one okay, it was more lemon and not much of the mandarin, not hint of tea in it at all.

This beverage had quite a tangy flavour, but yet mildly sweet at the same time. There was a very clear lemon taste, but not much of a mandarin taste which was a bit of a disappointment.

Overall this was a very pleasant beverage that could be easily enjoyed frequently.

This one wasn't really my cup of tea (yes pun intended), it was more lemon and not much of the mandarin, in fact it reminded me a bit of a lemon cordial drink, and I was never really a fan of those either. It would be a great drink if you like lemons, however i'm not really one of those people, and i was a bit disappointed that the mandarin flavour didn't really come out as I hoped it would.

The Lemon and Mandarin would easily be my second favourite of the lot. The lemon favour is quite strong in this drink, giving you a lovely tart citrus bite (quite a bit tartier than the Velvetberry), yet with enough sweetness that the sour doesn't become too overpowering. Again the extra flavour, this time being mandarin, was barely noticeable, and the smell you get before taking a sip is definitely all delicious lemony goodness!

As I found with all flavours except for the Velvetberry, this drink is much better served well chilled, as when it's left to warm to room temperature, I found the sweetness faded quite a bit, leaving you with just the sharp, tart bite of lemon, and a rather unpleasant bitter aftertaste. It's not really a problem though, as this Teza drink is so tasty, it doesn't tend to last long enough to warm up!

If you're looking for a nice refreshing drink on a cold day, and enjoy a good hint of sour mixed in with the sweet, then Teza's Lemon and Mandarin is well worth a try. However, if you don't like too much of a tart bite to your drink, then you might find one of the other 4 flavours better suited.

I'm not a tea drinker at all, but I found this to be a very pleasing drink with only a mild tea flavour.

This beverage had quite a tangy flavour, but yet mildly sweet at the same time. There was a very clear lemon taste, but not much of a mandarin taste which was a bit of a disappointment.

Overall this was a very pleasant beverage that could be easily enjoyed frequently.

This one took me a while to get around to doing, mainly because I am not a huge tea drinker and just kept overlooking it when I wanted a drink. This is in no way a bad reflection on the drink, merely an insight into my very unhealthy choice-habits in beverages - I love my Lift Plus way more than is good for me.

This was a very pleasant beverage to try. The 'dry' tea taste was almost entirely masked by the tart and tangy fruit, which was really good for me and I am not a fan of the dry 'tanin' tastes. I think that was a HUGE factor in why I never got into drink tea or red wines.

The fruit was certainly the dominant taste all the way through, though it was certainly the lemon that bullied it's way to the tastebuds first, taking out dominant position on the overall taste. This was also true when it was used in our Cheesecake Lab experiments... if anything, the cheesecake making process enhanced the lemon to total dominance, drowning out the mandarin flavour entirely. This was not something that concerned me really, as I found the sweetness of the cheesecake filling and the tartness of the lemon complemented each other perfectly, resulting in a REALLY yummy cheesecake I want to make many, many more of.

The sediment level in the bottles I tried were noticeable, but a good shake mixed it in perfectly well, making it great to drink. Served well chilled provided the best taste. Room temp brought out those pesky tanins again, and nearly-ice cold made it almost flavourless, locking down those flavour-containing volatiles until they were well past the tastebuds before they broke free.

Overall, one of my favourites from the range and not only one I have hyped to friends and casual acquaintances, but will continue to do so any time I hear someone complain about boring iced teas or fruit drinks. I also found that when I reduced about half a bottle of this in a saucepan with 1 cup of refined sugar and a half cup of water, it made a really nice syrup to pour over ice-cream or shaved ice as part of a dessert that really offset a BBQ meal perfectly.

The Lemon and Mandarin flavour is a full bodied flavour. The lemon flavour hits first and is the dominant flavour; however the mandarin does give an underlying sweet note to the drink and rounds out the acidic bite. The mandarin is more evident on the nose than on the palate.

The flavour of the green tea underlies the whole drink - it is there and you can taste it if you 'look' for it but is not overpowering and leaves no bitterness on the tongue.

This said, the drink when cold is very refreshing and the perfect drink on a hot day after mowing the lawn. My daughter enjoys this flavour more than the others - I do too.

This was a real interesting flavor at first I thought yummy but upon opening it and taking my fist sip I had to re-think my fist impression as it was very bitter and tart for my liking and I could not taste the Mandarin flavor over the lemon. This was very disappointing. I also found it left a furry feeling on my tongue I guess this was from all the lemon. Overall this would be a great drink for those that love lemons I would have enjoyed this drink a lot more if I could have tasted the Mandarin.

Refreshing, zingy, tart and sweet at the same time, with just a hint of tea sneaking around the sides to give it a bit of edginess. This was my favourite of the range.
I loved how the sharpness of the lemon was complimented by the tartness of the mandarin without pushing it too far over and into acidic tastebud death.
All in all, a very tasty refreshing drink sure to be a hit with those who appreciate sour lollies and real lemonade. The sediment at the bottom is minimal and utterly invisible after a good shake.

Our orange and barley is blended with passionfruit to create a great tasting thirst quencher for the whole family. Made without preservatives, artificial colours or flavours, we've put a refreshing twist to this favourite flavour.