Home > Categories > Games & Puzzles > Card Games > Who Did It? review 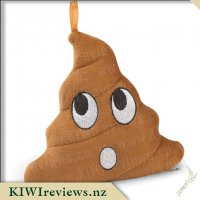 Who Did It? product reviews

Was it YOUR dog that pooped in the living room? Because it wasn't my bunny! In this hilarious card game, race to be the first to get rid of all your cards, avoiding the blame of owning the animal that pooped. Each game is as funny as it is fast; quickly find your card, be the first to throw it down, and then blame someone else!

I saw this on the shelf at work and didn't really pay it much attention until someone asked what the game actually entailed. I couldn't really say, but I had a good look at it and figured it was something that my three kids would probably enjoy and it looked like a game we could all join in on. This version features a poop emoji bag, inside the cards are a nice, big triangle size. There are 6 sets of the animals, each one a different colour, which is handy for tidying up afterwards and ensuring you know who put their card down. There are also some small, thick, poop emoji counters which you don't want to collect, as having three leads to the end of the game and you loosing.

The game play itself is very quick and easy to learn. First player places down a card of their choice saying "it wasn't my ..... it was somebody elses ..." (not the exact words from the rules, I don't think, but the base of what needs to be said is there). Everyone else then races to put down their animal that has been named, first. The person who got there first then repeats the phrase, naming another or the same animal. The game does get harder, the more cards that go down, as soon enough you need to be attempting to remember what has already gone down. Because, if you name an animal and no one has it to put down, poop is coming your way!

This is a good game for some nice, quick fun. It takes up little space and not a huge length of time either. The only downside is that some people get a little over excited, leading to smacked hands, ouch! and bent cards, but its worth the trade off for some entertainment.

Delve further into the Forgotten Realms with Neverwinter Nights: Shadows of Undrentide! Begin your adventure in the small mountain town of Hilltop as a student under the tutelage of a mage named Drogan, and then traverse the deadly Anauroch Desert to reach the ancient ruins of Netheril. Uncover a fiendish plot as you battle a multitude of new enemies through over 20 hours of original new gameplay. Play as any of the classes in the original ... more...