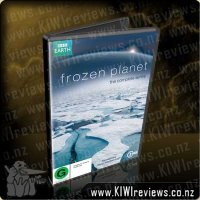 A World Beyond Imagination - Narrated by David Attenborough

Embark on the trip of a lifetime to the frozen wildernesses of the Arctic and Antarctic in the landmark six-part series, Frozen Planet from BBC's renowned Natural History Unit. Ambitious and epic in scale, it is the ultimate close encounter with the polar regions, capturing all the jaw-dropping beauty and majestic power of the elements. Receiving a debut audience on TVOne in excess of 650,000 viewers, this documentary series is set to be a hit with New Zealand audiences.

Narrated by acclaimed naturalist Sir David Attenborough and featuring the incredible wildlife cinematography that made Planet Earth such a worldwide success, Frozen Planet has taken new technology to the most extreme and remote parts of our planet, capturing groundbreaking imagery above and below the ice. With the effects of global warming more evident in the Arctic and Antarctic than anywhere else on the planet, this could be the last time they are filmed in such detail, before they change forever.

Encounter spectacles that few of us will ever witness as the camera teams go deep under the sea-ice into a magical world of giants, plunge into the heart of an erupting polar volcano and fly to the South Pole across the Antarctic icecap, the largest concentration of ice on our planet, retracing the steps of the great polar explorers. Get closer than ever before to the lives of our best loved and most charismatic animal characters - polar bears, penguins, wolves and orcas, and witness the most extraordinary examples of survival against the odds as can be found anywhere on our planet. This is the poles as you've never seen them before, and may never see them again...

Frozen Planet features the most extensive coverage of the Antarctic ever, as well as filming in every Arctic nation.
•  4 years in production
•  2356 days in the field
•  134 hours beneath the ice
•  35 days trapped in tents by blizzards
•  425 days at temperatures below -15 degrees Celcius
•  598 pairs of thermals

Special Features:
•  On Thin Ice - a 50 minute documentary about the effects of climate change
•  Science At The End Of The Earth

As seen on TVOne

To call this series "mind-blowing" would be a gross understatement of the highest order. It goes way beyond that... it's mind-opening, life-affirming, perspective-shifting and paradigm-shattering... and so much more that mere words can not cover without moving beyond readable and into the realm of overload. Suffice to say, it is something I think everyone should watch... because at the rate the climate is changing and mankind is harvesting all the resources for ourselves, this may be all you ever see of some of these animals in their natural habitats ever again.

As always, Sir David does a wonderful job of narration, with a few cameo appearances on the lens-end of the camera. However, it is clear to see that though his mind has not lost it's agility, his body is growing less able to handle the rigours of the 'fieldwork' and thus more of his time is spent back at the studio than out on the ice.

Those who have taken up the mantle of getting the footage out in the field have certainly stepped up to the challenge, and done themselves - and the BBC by reflection - very proud indeed. True adventurers, professionals, and experts in their chosen endeavours, the footage they have collected is second to none. I have now seen the underside of the Arctic ice pack, the thickness of the Ross Ice Shelf in Antarctica, the Narwhal having to decide who gives way at an intersection of cracks in the ice floes, penguins flying in the air in slow motion, and a hundred other wonders.

Overall, this is just incredible, a series you will want to share with your kids. Short of animated movies, they may never see the likes of some of these beautiful, terrifying or mystical creatures ever again. That thought, more so than anything else, breaks my heart. The investment in knowledge this embodies far outweighs the paltry sum it costs to buy, so please, consider getting this. It really is worth far more than the price tag could reflect.

Tim Brooke Taylor, Graeme Garden and Bill Oddie, were an instant success with their mixture of outrageous humour and visual effects.

The characters were instantly recognisable stereotypes: Tim, the champion of everything British, Bill the bearded hippie in his rebel combat jacket and ... more...