Home > Categories > Movies > Comedy > Do Not Adjust Your Set review

ProdID: 858 - Do Not Adjust Your Set
Directed by Ian Fordyce 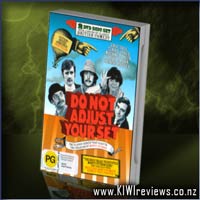 Disclosure StatementFULL DISCLOSURE: A number of units of this product have, at some time, been supplied to KIWIreviews by the company for the purposes of unbiased, independent reviews. No fee was accepted by KIWIreviews or the reviewers themselves - these are genuine, unpaid consumer reviews.
Available:
Jan 2006

Do Not Adjust Your Set product reviews

Teatime. 1968. In millions of homes something strange was happening and TV comedy around the world would never be the same - 'Do Not Adjust Your Set'. Hitting audiences like a wet fish in the face it was weird, wonderful and hilarious. 'Do Not Adjust Your Set' combined the writing and performing skills of Eric Idle, Terry Jones and Michael Palin, added a dash of David Jason, a dollop of the legendary Bonzo Dog Doo Dah Band and a hint of Terry Gillam. Also featuring a Special Guest Appearance by 'The Goodies" Tim Brooke-Taylor, it's time to feast your eyes on the madness and discover how something completely different began....

Originally planned as a children's show 'Do Not Adjust Your Set' soon gained a large adult following. Featuring Eric Idle, Michael Palin, Terry Jones, David Jason and Denise Coffey with animations by Terry Gillam and music interludes by Neil Innes' Bonzo Dog Doo Dah Band the programme brought together some of the greatest writers and performers who would eventually create Monty Python.

Another offering to the die-hard Monty Python fans. Whilst this is not a Monty Python production, it does feature many of the cast of Monty Python in what could be considered the immediate precurser to the now much famed series. Shortly after this series was filmed, a number of the stars of this series joined forces with "At Last, The 1948 Show" to form the now legendary troupe.

Their largely irreverant humour is compulsive viewing. The quality is on the poor side to what we would expect today, but it is in great condition for something that has been achived for almost 40 years. Some of the humour was obviously topical at the time, and as such, is very dated now, but on the whole, their humour travels well down the ages and is as mirthsome now as it was when it was first shown in the late 1960s.

This DVD, along with its sister DVD (At Last, The 1948 Show) would be essential viewing on a "beer and a comedy" night, and of course, an essential part of any Monty Python collection.

Buy it, watch it with friends over a few beers. At $25, it will be an entertaining night in, and well worth it.

In small-town Iowa, an adopted girl discovers her talent for butter carving and finds herself pitted against an ambitious local woman in their town's annual contest.