« Do Not Adjust Your Set review 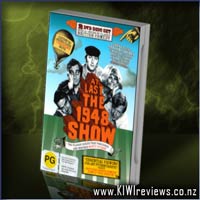 Disclosure StatementFULL DISCLOSURE: A number of units of this product have, at some time, been supplied to KIWIreviews by the company for the purposes of unbiased, independent reviews. No fee was accepted by KIWIreviews or the reviewers themselves - these are genuine, unpaid consumer reviews.
Available:
Jan 2006

At Last The 1948 Show product reviews

At Last The 1948 Show triggered a revolution that changed the face of TV comedy forever.

Bursting onto small screens in an explosion of unrelated and often surreal sketches, its main perpetrators were John Cleese, Graham Chapman, Marty Feldman and Tim Brooke-Taylor, with special guest appearances by Eric Idle, Jo Kendall, and 'The Goodies' Bill Oddie. What 'At Last The 1948 Show' began the inestimable Monty Python would one day finish in mind-blowing style....

Produced in 1967, this recently discovered collection launched the Monty Python phenomenon and, much like the effect of the Beatles on music, the world of comedy has never been the same.

What a great show. Ok, so the quality isn't too great, but then what do you expect for something that is almost 40 years old. I gather it has been stuck in the archives and pretty much forgotten about since it was first made. I cannot say that I had heard of it before I was sent the DVD, and must say that I now find it was a notable ommission in my childhood education, in it's rightful place as one of the grandfathers of English comedy.

It features a number of very young looking, though now very famous celebrities in what must have been their first forays into television.

Though some of the skits and jokes are dated (again, what would you expect after almost 40 years), many of them are as funny now as they were when they were first broadcast; a truely timeless collection.

This collection would be very popular with the die-hard Monty Python fans, who would cherish this foray into their brand of irreverant humour, and would be a must in any Python collection. To others it would be of little interest. That said, it is well worth viewing and well worth the price.

From the New York Times Best-selling Author R.L. Stine comes the Season Two return of Goosebumps, a collection of wildly popular and incredibly zany children's horror stories from the internationally renowned books (of the same name) for the first time on DVD in Australia and New Zealand.