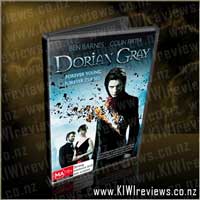 When true love enters the frame, Dorian struggles to hide the secret behind his eternal youth and is forced to look deep within himself, beyond the shimmering surface, to re-discover his own humanity. But is the love of a good woman enough to wipe clean his many transgressions or has he fallen too far to be saved?

Many years ago, back when dinosaurs ruled the earth... well, OK, not quite THAT far back perhaps, but when I was younger at least, I encountered an early TV show about this character. It chilled me to watch it, knowing that all the sins Dorian committed, all the years he stayed alive... were all heaped upon his image on canvas instead of upon himself. Immortal by dint of a fluke of artistry with a touch of magic.

In the original storyline I recall, if Dorian was to even glance at the painting, and see what ravishes his lifestyle hath wrought upon his soul, the miasma of ages would immediately transfer back to him, more than likely killing him outright on the spot. This movie was slightly different in that Dorian was well able to stare upon the image of his soul-self without pain of retribution... he could look at any time he wanted, and see how much depravity he had brought upon himself, see the very stains on his soul reflected in paint on canvas. This, I think, made this version a little more horrific... for what kind of man could clearly see every blemish on his very nature, yet continue to heap more upon them?

The character of Dorian is well-played by Ben Barnes, whom I first recognised from his role as the young Dunstan, the father of the 'hero' in the movie Stardust. He manages to pull off an amazing job of a youth, full of innocent amazement at the wonders of the 'big city' at the start of the film, and without any obvious transitions you suddenly you are watching a man who has sipped from the cup of basest debauchery, found the taste to his liking, and is quaffing it back by the barrel well before his lack of aging is really being noticed. Even his erstwhile mentor and the architect of his corruption, Lord Wotton - astoundingly well-played by a barely-recognisable Colin Firth - seems to be stunned at how the lad takes to his new life of self-pleasure.

The usual troubles ensure... Dorian bites off more than he can chew, destroying the lives of the innocents he finds himself caring about, spreading the stains of sin to those around him who share his love of the pleasures of the flesh, encounters awkward moments near the end when his youthful looks scare those who have grown old beside him... a little predictable, but in this case that actually added to the horror of the tale for me.

Overall, though this movie may be one of those 'acquired taste' titles, I found it very watchable mostly... the ending was a little limp and corny, but then, it had to be somewhat predictable in order to illustrate the moral of the tale - Every pleasure carries with it a price... take care for you may decide in hindsight that some were not worth paying.

Love is here to stay... so is her family.

For the few who haven't seen it, Toula Portokalos is 30, Greek, and works in her family's restaurant, Dancing Zorba's, in Chicago. All her father Gus wants is for her to get married to a nice Greek boy. But Toula is looking for more in life. She meets Ian Miller, a high school English teacher and dreamboat. They date secretly for a while before her family finds out. Her father ... more...