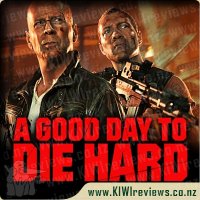 Disclosure StatementFULL DISCLOSURE: A number of units of this product have, at some time, been supplied to KIWIreviews by the company for the purposes of unbiased, independent reviews. No fee was accepted by KIWIreviews or the reviewers themselves - these are genuine, unpaid consumer reviews.
Available:
in cinemas from 14th February 2013

John McClane travels to Russia to help out his seemingly wayward son, Jack, who he discovers is about to be convicted of premeditated murder. When a terrorist attack happens during the trial, Jack escapes and reveals the truth of the matter, causing the father and son to team up against underworld forces.

Another Bruce Willis sequel for the Die Hard franchise, I was expecting to have a mix of extensive and convoluted terrorist plots that his character John McClane would have to unravel, and a bunch of jumping into situations without a plan, guns blazing. The American way. In fact that part is often alluded to and joked about frequently.

But the franchise has moved far away from believeable plot, and is focused too much on Michael Bay-style explosions and near death experiences to show the passing of the torch from McClane to his son. Unlike most of the previous movies where the plot involves the heroes fighting to bring down the terrorists, here the true villains remain hidden for the majority of the movie, with their intentions never fully explained. Its simply a "You lied to me. Therefore I will kill you" scenario.

With reckless and unnecessary destruction, along with most likely a long list of potential civilian deaths during the opening scenes, McClane's ethics seems to be slipping, not allowing him to hold his usual "stubborn underdog" title. It passed just over an hour and a half of my time, but having seen it, I don't feel the need to see it again. This may prove to be a franchise-ending film.

On the positive side however, the explosions-though overused- were distracting, colourful, and creative. Clearly, the writers have spent the majority of times, thinking of more creative ways to fight and kill people (but can they really expect to beat driving a car through a helicopter because McClane "ran out of bullets"?)

So give it a watch, just for the sake of completing the series, but don't expect a classic.

Ok I admit, I am in the minority with this movie. I enjoyed it. Liked it even. It was was well entertaining with some excellent cinematographic moments. Baby McClean does well (and provides eye candy for the girls!) :)

Of course, it is the usual Die Hard storyline: thriller, car chases, questionable morals. This movie adds in two heroes (father and son) and a twist that is memorable and keeps you watching. Of course Bruce Willis is thrown all over the show, battered and bruised, only to rise again and again and to keep fighting for the good of humanity - like every good Die Hard movie! There are also the foreign "enemies" like every Die Hard movie gone before it!

My advice: sit back, do not think too seriously, and just enjoy the ride. It will entertain you if you let it, and just do not take it too seriously.

In any movie franchise if it gets to the 5th one you can expect to really be grasping at straws for a plot to work. For die hard, a good day to die hard they may have reached their limits.

In this movie we get to see Bruce Willis' character head off to Russia to find out what has happened to his son, I won't go into any more of the plot, but will say I did like it on a whole.

Bruce Willis is looking really old, and that can be put down to the fact that people do age, even Bruce Willis. But he is still the same guy he was in the very first Die Hard all those many years ago, with a love hate relationship with baddies, and a constant need to fire guns and shoot stuff you will get your Die Hard fix with this movie.

I did get the comments via social media about this movie, that the special effects weren't that good, the lines were cheesy and there was some sort of problem with the sound editing. Now I don't really know what that person went to see, but I don't think it was the same one I did.

Die Hard has to consist of explosions, silly one liners, and plenty of action. Die Hard a good day to die hard comes up with all those goods, if you are after anything more than that, then I don't think this movie is really for you.

I went with my husband to see A Good Day to Die Hard on the day it opened, Valentine's Day. The theatre was packed and we arrived late so unfortunately had to sit in the second row. I am not a Die Hard fan but my husband is and as a result I have watched all the other Die Hard movies. I found them alright, and it was my turn to compromise on movie choice.

The movie makes a couple of references to the previous movies but could easily be watched as a stand alone movie. The famous John McClane line is only heard once throughout. He has definitely aged well, keeping up with his son and bouncing back from every crash or fall.

After the movie we talked about some things, especially in Chernobyl, that made the plot unbelievable. There are also a couple of times things just appear with no justification of how they got there. We thought that perhaps there were some deleted scenes that explained more.

My enjoyment of the movie was definitely tainted by being so close to the screen. Firstly I didn't have the peripheral vision to read many of the subtitles. Many of the action scenes (which was most of the movie) was blurry for a second before it came into focus. It was also very loud.

Both my husband and I want to see it on DVD when it comes out so that we can enjoy it without the problem of being at the front of the theatre. Although both of us agreed that the first Die Hard is still the best one.

Being the fifth movie in the franchise, and after the stunning efforts from the fourth movie, this one really shows how Bruce Willis has aged. Despite that, his character still took the knocks as rough as his "son" did, while still dishing out those classy/corny one-liners that are the hallmark of this franchise.

Set in Russia, the movie has twist after twist... there's enough red-herrings to feed a whole pod of dolphins, plus enough back-stabbing, betrayal, double-crossing and even triple-crossing to satisfy the most discerning aficionado of convoluted plots... but, I couldn't help but feel it was a little TOO much... kind of a smidgeon of overcompensation, trying to prove that the franchise shouldn't be over yet...

Though I think Bruce Willis is still a stunning action actor, I can't help feel his roles need to change to something more in the "command and control" scene and less of the "grunt on the front lines" - his age makes it unbelievable, and his diminished spryness shows all too clearly in some of the scenes. It will be interesting to see if he was saving all his best moves for the upcoming G.I. Joe movie.

Overall, it was still a great movie to watch, and I don't regret seeing it one jot... but I did walk out wondering if the next one was going to have him in a powered wheelchair taking on baddies with machine guns hidden under his lap blanket, and rocket grenades stashed in fake oxygen bottles. Still, some great performances from Jai Courtney in places. The big verdict though: It's time for this franchise to die... quietly.