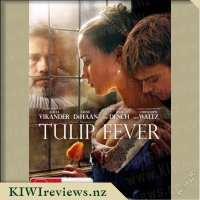 in 17th-century Amsterdam, an orphaned girl (Alicia Vikander) is forcibly married to a rich and powerful merchant (Christoph Waltz) - an unhappy "arrangement" that saves her from poverty. After her husband commissions a portrait, she begins a passionate affair with the struggling young artist (Dane DeHaan). Seeking to escape the merchant's clutches, the lovers risk everything and enter the frenzied tulip-bulb market, with the hope that the right bulb will make them a fortune and buy their freedom.

If I were to describe this movie in one word, that word would be opulent. The cinematography is stunning: sets, costumes, lighting are all designed to reflect the artistic vision which in one of the main themes of the movie. The establishing shots transport the viewer into the world of 17th-century Amsterdam to the point where I thought it would have been even more stunning filmed in 3D. I was prepared for a visual treat, and in that respect the film delivered.

The use of carefully selected lighting filters in the scenes where the artist is posing his subjects for their portraits produces an effect that is reminiscent of some of the works of the real old masters of the time. It was clear that a great deal of research had gone into the artworks of this period; it had translated so well to the screen that it was easy to imagine that the paintings featured in the movie were the real thing! Again, for anyone that loves art and knows something about the Dutch Golden Age school, these scenes are sheer magic.

The dialogue between the characters was easy to follow; despite the restrictive nature of some of the costumes, the actors portrayed their roles with apparent ease. None of the interchanges were stilted, and action followed words in logical sequence. What was not so easy to follow was the plot itself. At times it was drawn out to the point where it was difficult to follow; this could have been addressed by tighter editing. As it was, there were several places where it was not quite clear what was meant to be happening.

I found myself comparing the character of Jan with that of Jack Dawson in Titanic. There was the same romantic subplot with the poor artist winning the love of the beautiful young girl who is unhappily paired with an unsuitable man. There were other parallels too - the confidence of the artist who believes in the perfection of his work, and the effect of that work on the subject of the portrait. And the essential element, of course - the physical beauty of the young artist himself!

My delight in seeing that Judi Dench was one of the main actors turned to disappointment when I realised how small her role was. Her portrayal of a pipe-smoking, hard-hitting nun was one of the high points of the movie, providing comic relief as she furthered the plot. Dench is a drawcard in any movie, so it is unfortunate that the director did not choose to give her a more substantial role. Some of the over-drawn-out scenes could have been heavily edited to make space for this.

The star of the movie (apart from Judi Dench) was, of course, the tulip. Tulip Mania was a real event which inspired market madness as buyers jostled for a chance to own a rare tulip bulb which would produce a striped flower. Like all fads, this craze did not last - but while it did, there were fortunes to be made by speculators. Jan and Sophia try to make their fortune by entering the crazy world of the tulip speculator, but things do not work out quite as they intended!

So - would I recommend this film? Yes, if you are into fine art and enjoy a good romance. It offers both and is certainly a visual and sensual delight. But it you are into action movies with fast dialogue and plenty of action, it might not be to your liking. There again, if you don't watch it, how will you know? If in doubt, go and see it - you might, as I was, find yourself so immersed in the technical perfection of the filming that the negative aspects of the lengthy plot cease to be relevant!