« The Complete Cartoons of The New Yorker review 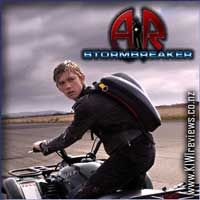 When his uncle Ian Rider, an MI6 agent, is killed, Alex learns the truth and finds himself forced against his will to take on a dangerous mission for the British Secret Service.

OK, keeping in mind that this is a movie aimed at the younger audience, I still found myself more amused by the actors themselves, than the storyline. With some great action scenes (particularly the rope scene in the car-yard) and some truely corny ones too, it was a mixed bag for me.

Highlights included: Andy Serkis' performance, the... umm... OK, so that was the highlight. The Corn Factor bits: the complete lie about Sodium Pentathol, the over-acting by... well, almost everyone, particularly Mickey Rourke... the Portugese Man of War model and it's ability to electrocute a fish into a skeleton in a split second... the whole concept... I tell you, they should have issued two small forks and a knob of butter with your tickets!

Overall, though the gizmo's weren't TOTALLY unrealistic, the effects used to emulate their actions were pretty lame (eg. Smoke Bomb scene... Just WHERE is the smoke coming from again?) but kids will probably still love it. After all, they can look at a block of wood and see a train, or a racecar, or... so should be able to fool themselves into liking the movie based on what it SHOULD have been, instead of the lame duck it turned out to be.

Score: 4.3
Product reviews for listing 2059: Beyond The City Limits -  Directed by Gigi Gaston

Two Russian gangsters conspire to rob a casino but their plans are bungled when two corrupt cops - in on the daring heist - are killed. Fortunately, with the help of their girlfriends, the robbery is back on.

But when the gangsters find the girls in bed together they kick them out. Now the girls devise a plan of their own. The three women outsmart their unsavoury ex-boyfriends to go ahead with the heist.

This is their big chance... can they do it?