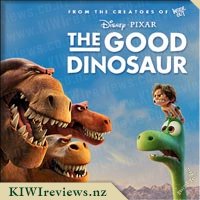 Disclosure StatementFULL DISCLOSURE: A number of units of this product have, at some time, been supplied to KIWIreviews by the company for the purposes of unbiased, independent reviews. No fee was accepted by KIWIreviews or the reviewers themselves - these are genuine, unpaid consumer reviews.
Available:
In cinemas from Dec 31st 2015

"The Good Dinosaur" asks the question: What if the asteroid that forever changed life on Earth missed the planet completely and giant dinosaurs never became extinct?

Pixar Animation Studios takes you on an epic journey into the world of dinosaurs where an Apatosaurus named Arlo (voice of Raymond Ochoa) makes an unlikely human friend. While traveling through a harsh and mysterious landscape, Arlo learns the power of confronting his fears and discovers what he is truly capable of.

Directed by Peter Sohn and produced by Denise Ream. From the point of view of a 27 year old viewer, this film was hit and miss. Off the bat, I found the voice acting of Raymond Ochoa rather abrasive; high-pitched, whiny, and it really grated with me for some reason, and had a negative impact on how much I enjoyed the film. Voice acting aside, the film was quite interesting. With the general premise of the "dinosaur killing" meteorite missing earth, leaving the dinos continuing their dominant role in the food chain, while mammals evolved, but obviously on the side.

The animation style was interesting, with Arlo very reminiscent of the "Wallace and Gromit" Aardman Animation works. The use of colour was well done, with moods portrayed and changes in emotions shown through changes in colour, and the wide variety of different environments and scenes were aesthetically pleasing.

Plot-wise, it was very simple. It followed the usual theme where a challenge is set, but for some reason or another the main character must complete it without parental assistance. The film went through several mini storylines throughout the film, most based around introduced characters that played no part in the story beyond continuing the character development of Arlo. As far as the minor "sidequest" characters go, I loved the tyrannosaurus rex arc. The entire way that they were portrayed showed a different side of the t-rex, a unique portrayal that I truly loved. And the way that their movements were animated was mesmerizing; reminded me a lot of how horses run. A graceful canter, that made me almost see them as centaurs. Easily my favourite part of the film.

The main storyline was rather repetitive, and started to feel like "one step forward, two steps back", but it was incredibly simple, which makes it very easy for all ages to follow. There were some parts of the film (storm scenes, pterodactyl scenes) that the younger children did not seem to enjoy as much, but it did seem to lead to larger cheers at the end. It was rather predictable, but it was conveyed in a way that still managed to pull on the heartstrings. The ending, in my opinion, didn't really end with a completed storyline for me. There were still some parts left unanswered, and that did irk me, but none of the kids noticed.

This is simply a children's movie. There isn't really any humour put in for the sake of entertaining adults, which disappointed me. With many recent family films catering to both children and adult humour, I was hoping for some chuckles, but no such luck. A great film for the kids, and would be a great DVD to keep the little ones quiet. But as the adult, would I watch it again? Only the t-rex part. Only the t-rex part...

My family saw the trailer for this film the second it came out and from that moment on, anytime we were on YouTube and my eldest saw anything related to it he was loudly requesting that we watch it, so I'm sure you can guess just how excited he was when it was announced that a friend was shouting us to go and see it at the cinema! The movie opens with a typical short film, a big first for Pixar of a lead Indian boy and features Hinduism, without giving anything away I will just say that it was just as good as all their previous short films.

So the basic premise I knew but I didn't know much beyond that, I was pleased to see that we were seeing the world as it was a million or so years after the famed asteroid missed, not just straight after, so added that small bit of realism to the film. We get to meet Arlo and his family from his birth, which makes certain moments just that little bit more heart wrenching to go through with a good lead up into things, it doesn't just rush into Arlo meeting Spot and even when they do meet it's still not a full run into their story. The cast is very small but it works well for the story, each is important in Arlo's journey and full of their own personality.

The story is done beautifully, I was going through a full range of emotions from some funny moments, edge of your seat moments, a couple of gasps and yes, a few tears. My kids were glued to the screen the whole time and didn't even get halfway through their popcorn and you could hear their reactions to moments throughout the film. The animation was top of the line as we've come to expect and there's plenty of moments that are in there for the adults, references that went over the kids heads but we could enjoy.

This was a fab family movie, yes some scenes might scare younger kids but my four year old handled it far better than I expected. If your kids like dino's or just a good family film all around, this is one to watch this year. It's good to know that in a world full of horrors, frustrations and over-dramatised blockbuster specials, there are still movies that show me I'm not as jaded as I once thought. That there are movies that can move me to tears with the simple, human things. This is one such movie... I am not ashamed to admit that by the end of the movie I had soaked a few tissues with my tears.

I love the characters, and how the premise of the meteor missing the earth meant that Mammals still developed, but not as the dominant branch of life - in fact it seemed that primates still developed into humans, but almost every other warm-blooded animal except for 'longhorns' - a variety of buffalo - and a lemur-like critter with a wicked sense of humour, vanished.

No matter, the warm-blooded branch of the tree of life in this alternate Earth is, to the absolute degree, irrelevant. A couple of hairy humans, three families of dinosaurs, and that's the total cast. What surprised me was how well this limited group of characters - about a dozen tops - played out. Everything needed for a tear-jerker of a movie was there, and every character was as defined as it needed to be, and just enough more to give them a little bit of back-story... enough to keep them believable.

There's a few cheesy moments... giddyap cowboy... but all in all the movie was funny, thrilling, scary and heart-warming in a good mix. My viewing companions - another adult, a teenager and a youngun - all loved it, for slightly different reasons unique to each. I was taken by the great characterisations - I thought The Pet Collector, aka Forrest Woodbush, was absolutely stunning in his strangeness. Despite knowing he was voiced by the director, Peter Sohn, I could easily imagine Eddie Izzard doing the voice.

Overall, this is a "MUST SEE" holiday family outing movie. Seriously, if you don't so see it, you're missing out. Whether or not it's a blockbuster, personally I feel it's one of the best Disney-Pixar has ever put out!

Equally economical and creative with the truth, masters of the dark art of manipulation, Charles Prentiss (Stephen Fry) and Martin McCabe (John Bird) return for a second series of this satirical look at the machinations of the PR industry.

Whether it's rebranding the House of Lords as a new reality TV programme, 'The House', or softening up public opinion for an impending bid for British Airways by Osama Bin ... more...