« Dawn of the Planet of the Apes review 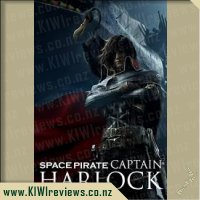 It is the year 2977 and 500 billion displaced humans long to return to the planet they still refer to as home. Captain Harlock is the one man standing between the corrupt Gaia Coalition and their quest for complete intergalactic rule. Seeking revenge against those who wronged both mankind and himself, the mysterious space pirate roams the universe in his battlecruiser, the Arcadia, defiantly attacking and pillaging enemy ships. Gaia Fleet leader Ezra sends his younger brother, Logan, to infiltrate the Arcadia and assassinate Harlock. But Logan will soon discover that things are not always what they seem and that legends are born for a reason.

I didn't actually realise this was an animated movie, when I first received the copy. But I soon saw that the film is done by Toei Animation (famous for such works as Dragon Ball Z, Digimon, Sailor Moon, and One Piece). In fact just looking into the film a bit, Space Pirate Captain Harlock is actually a Manga that was adapted into a television series in the 70's.

Having not been aware of any this backstory beforehand, I watched this film unintentionally testing the quality of the film as a standalone. The premise was interesting; a galaxial expansion of the human race that led to the overharvesting of resources in all planets, which in turn led to an accumulated population of 500 billion attempting to return to Earth leading to a "Homecoming War", and eventually nobody being allowed to return.

Not knowing any of the backstory beforehand, it was certainly a lot to take in, likely too much for the short length of the film. I ended up seeing very little "Pirate" in the film, which I felt was disappointing. The pirate parts were the most exciting parts. and while the story revolved around Harlock, he was barely involved in the film at all, taking on a more passive approach, leaving everything to his crew.The battle between brother Ezra and Logan was the more intense emotional experience, and it had your allegiances switching from one side to the other as more plot points were revealed.

The animation was great. It had a 'Final Fantasy' feel to it, which to me generally means the highest quality of realistic animation possible. The plot itself was a little farfetched and overreaching, with the ending not really making the most sense; but the journey there was exciting to watch.

One thing that I couldn't get out of my head was how much the plot reminded me of Disney's Wall-E, with emphasis on the human caused destruction of Earth, and the plant necessitating the need to return. An enjoyable film, and I hope they release more around this character. I want more Pirate!