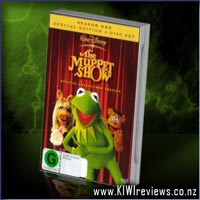 It's time to raise the curtain on THE MUPPET SHOW!

Join Kermit, Miss Piggy, Fozzie Bear, the Swedish Chef and more, in the first season of this groundbreaking twist on the classic variety show.

Contains all 24 episodes, which have been completely restored and remastered. The special features also include something you were never meant to see: Jim Henson's original "pitch reel" that propelled the Muppets' blend of original songs, sketch comedy and guest stars into a primetime hit for all ages!

OK, I'm showing my age a bit here, but I can still recall many of the Muppet Shows with fond memories. It was great to relive some old memories, and be reminded of some of the episodes that I had missed seeing all those years ago.

The pack contains four DVDs, each with around 6 episodes each, though some have more and some less... to make room for the extras etc. My favourite episodes were those that had skits involving the Swedish Chef... my all-time favourite character, and the episode with Vincent Price as the special guest, which originally screened in 1976... of course, it wasn't my favourite episode back then, but became my favourite after I saw some of his other movies in later years.

Overall, if you have ever enjoyed The Muppet Show, or you just want to relive some wonderful memories from your younger years, then this is a wonderful addition to your collection. If you are not sure what the story is regarding The Muppet Show, then you would be well advised to go out and buy this and see what you have been missing.

A love story in reverse: How I Met Your Mother is a fresh new comedy about Ted (Josh Radnor) and how he fell in love.

When Ted's best friend Marshall (Jason Segel) and Lily (Alyson Hannigan) decide to tie the knot, it sparks the search for his own Miss Right. Helping him in his quest is his bar-hopping "wing-man" Barney (Neil Patrick Harris), a confirmed bachelor with plenty of wild schemes for picking up women. Ted's ... more...