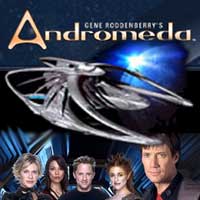 More than 3000 years ago, aliens from a planet called Tarn Vedra in the Andromeda galaxy invented a way to travel across the stars almost instantaneously. They called it Slipstream, and they used it to build a vast commonwealth of planets across six galaxies. When Earth was ready, we were welcomed into it.

It was a vast, diverse group of cultures working together in peace, striving to spread civilization across the Universe. Unfortunately, some factions came to disagree with the Commonwealth's methods.

The Nietzscheans - a group of genetically engineered humans who follow a strict interpretation of Nietzsche - felt that the Commonwealth was weak because it made treaties with its greatest enemies - the Magog. So they formed a rebellion and attacked the Commonwealth of which they were a part. The result was a civil war that plunged the Universe into a new Dark Age.

Despite the near-constant anticipation of seeing some yoddeling warrior woman leaping out of a side alley (a character-niche well covered by 'Tyr') this is a great sci-fi flick... and has the 'Star Trek' bonuses of 'a universe full of amazingly humanoid lifeforms' without seeming too unbelievable, an ever-increasing list of possible plotlines and some cool weapons that look somewhat common but have some decidedly uncommoon effects on space/time.

Well into it's fourth season in the States, this series screened on Sky Digital in New Zealand and is now available on DVD. At 2 episodes per $29.99+/- disc, 11 discs per series, this series could be considered a little expensive, but is well worth it if you liked Star Trek : NG, DS9, Voyager, etc.

Very frunky indeed. Well worth a view, so if you know a Sci-Fi buff, talk them into buying the discs, so you can borrow them. :)

The new 3D CGI animated TV series is an inspiring and playful re-imagining of Beatrix Potter's timeless children's classic. Join our hero Peter and his friends Benjamin and Lily as they encounter real dangers, overcome obstacles and outsmart predators, all while finding fun and excitement in the most unexpected places.

Follow Peter as he solves the mystery of the radish robber; brings home Mr. McGregor's cat by mistake; tries to rescue Lily from Mr. Tod's trap, and lots of other daring adventures.