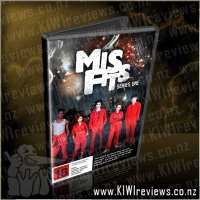 A gang of five teenage outsiders - party girl Alisha, Hard as nails Kelly, One-time sporting hero Curtis, Painfully shy nerd Simon and smart-alec Nathan - get caught in a freak storm while on community service and suddenly find themselves with strange superpowers. All find themselves with a power they didn't choose or want - a power which reveals their deepest, darkest insecurities...

Used to being demonised by society because of their crimes, the five reluctant superheroes struggle to control their new powers while coping with all the usual anxieties of teenage life: relationships, friendships, parents, sex - as well as saving their town from the evil that is descending upon it. Unlike their conventional counterparts, they don't swap their mobile phones for capes and tights. Instead they discover how tough life can be when you're all that stands between good and evil. Well, that and your curfew...

Special Features:
•  Behind The Scenes
•  Simon's Films
•  The Making of Misfits

This series is a slice of modern British sci-fi mixed with a hefty dose of daytime-soapie. We are introduced to a group of teenage social troublemakers who are caught in a strange storm during a stint of what we would call 'periodic detention'. As the week progresses, they slowly egin to discover they have each gained some strange supernormal abilities... the ability to overhear others' thoughts, the ability to become effectively invisible, the ability to created huge lust just by touch, the ability to rewind time and alter the flow of the future, etc. We also meet one chap who appears to have no powers at all, despite his determination to try everything he can think of.

And of course, as becomes obvious throughout the series, they aren't alone...

The overwhelming 'vibe' of the stories seems to be a strong moral of "Be careful what you wish for..." - because their powers are all reflections of their deepest desires... and fears. One girl finds that as soon as she makes skin-to-skin contact with someone, they suddenly become powerfully lustful for her... reflecting her desire to be found attractive, but fear that she's only wanted for her body rather than who she is. Another finds she can read minds, showing up her desperate need to know what people really think of her, but her fear that they see only what she the mask she wears in order to survive, and not who she really is inside.

One lad used to be a well-known up-and-coming track star, who was then caught in a nightclub buying drugs... it ruins his career, putting his girlfriend in jail, and him into the Community Service. His newly-acquired ability to rewind time and change the past - which he can't control and kicks in on it's own whenever he feels strong negative emotions such as fear or guilt - shows him 'the butterfly effect' in full force, as his life takes a series of looping roundabouts trying to repair the bad parts while still retaining the good - a vain hope he soon realises is dealt with by finding the best balance and riding it out.

Overall, this series is quite a laugh, if you can tolerate strong British accents and non-Americanised humour. It's not big-budget, which means there's no 'shine or gloss' - which I think is it's biggest saving grace. The environment these kids live in is rough - they are the next generation of social dregs in training after all, despite their desire to be better than their environment makes them. It's a good weekend view, with a lot to think about. I think the creators did a great job 'inventing' the 'darkness and evil' aspect that seems to be slowly overtaking the area after the storm, and though these kids are on the bottom end of the social scale, they soon see that they are part of the 'good guys' team because they don't want to abuse their gifts the way the others do... they just want to get back to having as normal a life as possible.

Score: 10.0
Product reviews for listing 6596: An Evening with the Modern Maori Quartet -  Performed by

An evening with the Modern Maori Quartet is a celebration of humour and heavenly harmonies. James Tito, Matariki Whatarua, Maaka Pohatu and Francis Kora are handsome and well dressed they're all swagger and suave with a fine sense of comic timing and cheeky charm.

These modern men play homage to the Maori showbands of old, working the audience with Waiata and wit, and guitars in hand.