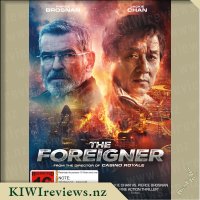 From the director of Casino Royale and GOLDENEYE comes a timely action thriller that unites two of the world's finest superstars - Jackie Chan and Pierce Brosnan. Quiet, humble and private Quan (Chan) is a london businessman whose long buried past erupts in a revenge fuelled vendetta when the only person left for him to love - his teenage daughter - is taken from him in a senseless act of politically motivated terrorism. In his relentless search for the identity of the terrorists, Quan is forced into a cat and mouse conflict with a British Government official (Brosnan), whose own past may hold clues to the identities of the elusive killers.

The Foreigner is a movie which won't disappoint, and one of those films that the trailer does not give away all the excitement and fast thinking of our star (Jackie Chan). Jackie plays Quan a man who has lost all his family bar his beloved daughter, who is killed before his eyes, in a moment of wrong place, wrong time. This seems to break the man who has been living a sedentary life, running a Chinese takeaway shop.

He begs all the right people for help, in bringing his daughters killer to justice, but he seems to be dismissed as the crazy Asian man who is making everyone's lives more difficult. Eventually Quan finds out enough about the act of terrorism to head off overseas, determined to track down the people responsible and hold them accountable.

This is where the true brilliance of Jackie Chan comes into play, and he meets his opponent in the movie (Pierce Brosnan) a 'retired' IRA terrorist who is now a British Government Official, and the talent of these two movie legends is seen. If you wish to see some of Jackie's world famous moves, there are several of these within the movie, but there is also a new element to his character, normally his roles are underlined with a sense of humour, but Quan carries with him the depth of his past, and the true feeling of a broken man who is prepared to do what ever it takes to find justice for his child.

I highly recommend this movie, it had no real predictable moments that often occur in an action movie, nor did it have the 'ah what' moments that you often come to expect. There are twists and turns within the story line, that keep you on your toes as a viewer, and the true bad guy is not revealed till the movie is reaching it's conclusion. I will definitley watch this movie again in the future.

Tom Cruise reunites with his Edge of Tomorrow director, Doug Liman, in an international escapade based on the outrageous, true exploits of a hustler and pilot recruited to run one of the biggest covert operations in U.S. history.

Based on an incredible true story of the CIA's biggest secret, American Made will remind you: It's not a crime if you're doing it for the good guys...