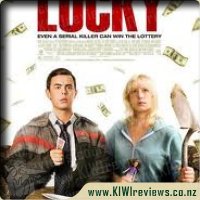 A wannabe serial killer wins the lottery and pursues his lifelong crush.

Imagine, if you would, that you knew this person who had a crush on you but you couldn't stand, and then they win lotto so you just have to hook up with them, and then it turns out their killer, literally!

The first time he buys a lotto ticket, he wins, becoming a millionaire overnight, and suddenly the girl of his dreams wants him and loves him, or so he thinks. Eventually they marry and then she discovers that he is a serial killer just getting into the groove of things. This makes me think of another movie, but since I can't name the other film so they can't be too similar which is good. The plot is fun and keeps you interested in the film.

There isn't much gore in this movie, just a few minutes, which is refreshing and makes it even more fun, The acting is really well done and I could fully believe that their characters are real people out there, somewhere, though one doesn't really want any more serial killers out there in the world. I really enjoyed how it all came together and how everything flowed, from the jokes to the drama, this was a well rounded movie.

I would happily watch this again, and may hire it out again so we can watch it with my mother in law.

This is the tale of a young man, who out of the blue, on the only ticket he has ever bought, ends up winning the lottery. For him this is not that big a deal, until his childhood sweetheart starts to pay him some real attention (not that he's aware it's just the money she's in love with). Naturally she pulls out all the stops and they get married, unfortunately for her, her new husband is a fledgling serial killer.

The great thing about this movie is that there isn't too much blood and guts, only taking up about 10 minutes of the film. The formula of the film is pretty much what you would expect, but the actors are wonderful and so this was a very easy film to watch and enjoy. And even better was that there are some moments that I wasn't expecting, and it all flows very well.

Our two main characters are portrayed wonderfully, so you can believe that he is just starting out as a serial killer whilst trying to maintain normality and not have his new bride find out whilst also dealing with the attention from his new wealth and the local police. She is played brilliantly, as the woman faking love and adoration whilst waiting for the next cheque to show up so she can get out of there when things take a spin out of control.

I quite enjoyed this movie, and I would watch it again (maybe a Friday night movie with my mum).

Ooooh Hollywood! The glitz, the glam...the Headless Horseman?! Join your favorite K-9 sleuth, Scooby-Doo, along with Shaggy and the Mystery Inc. gang as they find themselves in a tinsel-town twist!

While on a VIP tour of the legendary Brickton Studios, Scooby and friends get a first-hand experience of the rumored hauntings when classic movie monsters drop in for a creepy casting call. There's only one way to solve this thriller ... more...