Guardians of the Galaxy Vol. 2 review 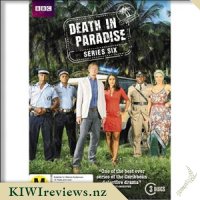 DI Humphrey Goodman and his team are back trying to solve the most baffling murders they've ever faced. From a body found on a cricket pitch to a victim killed halfway up a volcano, our detectives are led all over the beautiful island of Saint Marie - with one case even taking them across the seas to London. But it's not just the crimes that are proving tough to crack.

Humphrey finds himself navigating the course of true love when Martha returns to visit him. Florence is forced to deal with feelings of guilt over an old school friend. And while Dwayne encounters a long-forgotten person from the past, JP is in need of a little marriage counselling.

With some exciting surprises in store, the sixth series of this hugely popular show is even more fun and entertaining than ever as Humphrey and co. race to unravel more puzzling mysteries in the glorious Caribbean sunshine.

"Death In Paradise" is a series that commenced its run back in 2011. Although I now understand that it gained a huge following during the first five seasons, the first I heard of it was when Season 6 was given to me for review purposes. This could have caused real difficulties, but to my relief I found that I was able to immerse myself in the storyline straight away. The protagonists are presented in such a way that I did not feel I had missed anything.

Three characters have been in the series right from the beginning; this helped with continuity since their roles were well established and the rest of the cast have been able to slot in around them. Dwayne Myers (Danny John-Jules) is my personal favourite. He is a seasoned cop with the knack of picking up on clues others may have missed while continuing to be supportive of his team leader. He also has an eye for the girls, but this is presented in a charming old-world style which emphasises his sensitive, slightly vulnerable nature. I appreciate that aspect of his character since he never comes across as tacky.

Catherine Bordey (Elizabeth Bourgine) is a recurring character as well. Although her role is less important than that of Dwayne, she represents the colonial influence in Saint Marie with her bar providing a place for the locals to meet and socialise (and occasionally do some group problem solving around the latest case). The third recurring character is Selwyn Patterson (Don Warrington) who is the dour but kindly police commissioner - a position he takes very seriously to the point that he rarely smiles!

The rest of the characters come and go with each new season, and sometimes more frequently; and of course each episode features several guests who are linked to the case in hand. In Season 6, the very British Detective Inspector Humphrey Goodman (Kris Marshall) is replaced two thirds of the way through by the very Irish Detective Inspector Jack Mooney (Ardal O'Hanlon). Both Humphrey and Jack have unique, often unorthodox, ways of operating but what they do share is a sharp wit and the ability to think outside the square. Although there are plausible reasons given for the swap, and this is scripted convincingly, I still found it rather disconcerting and slightly unusual. Most of the times that a main character is written out means that he or she is killed off (frequently to return as a ghost!) but Humphrey is still very much alive. Just gone!

The final two main characters in Season 6 are the young and very attractive Florence Cassell (Josephine Jobert) and JP Hooper (Tobi Bakare). I am not sure which of them is the more beautiful, but they certainly add the glamour element to the DI's team; the rest of the cast appear very ordinary in comparison. Despite their good looks, they are both highly skilled police officers, dedicated to their jobs. It would have been easy to exploit them by playing the racist card and presenting the European DI as the all-knowing colonial chief, but this is far from the case. The cosmopolitan nature of the team prevails with the main protagonists hailing from a range of ethnic and cultural backgrounds, highlighting the diversity of the island's population.

I did wonder, as Episode 1 unfolded, whether the acting would live up to expectations. The character of Emer Byrne (Emily Taafe) did not seem to be leading anywhere; she seemed to sport the same facial expression the whole time, and personally I found her character quite implausible. However, the acting of the rest of the cast more than made up for this. In particular, I enjoyed the polished performance by Josephine Jobert (Florence).

Each episode follows a set formula where multiple suspects are examined (in the style of British whodunnits - I was reminded again and again of Agatha Christie's dramas) and then eliminated one by one. Six of the episodes are self-contained; the double episode (5 and 6), however, deviates slightly from the formulaic approach of the rest insofar as the "random clue" to the murderer's identity is lacking, and the story does not end in the classic British style.

The plots are tongue-in-cheek takes on police work, including a number of humorous moments as part of their unashamedly melodramatic plots. Each episode crosses genres from mystery to exotic adventure to soap opera, and often features a back story for one of the recurring characters in order to add interest. Often a trite and/or ingenious solution is prompted by a random comment from one or other of the team; this is immediately taken on board by the DI who then uses it to close a case..

There are some innovative film effects used in the series. For example, there are echoes of video gaming where an item that might provide the next clue is highlighted through zooming in on it. Flashbacks, sometimes used to show a prior event and at other times to present a hypothesis, are shown as vignettes in order to distinguish them from real time action. The theme music is bouncy and recognisably Caribbean, with the mood of a scene often loosely reflected through the inclusion of soft ambient music. Interspersed with the action are occasional establishing shots to remind the viewer that the series takes place on an island. The island itself (Saint Marie) does not exist but it is probably based on Guadeloupe, where most of the filming took place. (There were also a couple of sequences shot in England, and here too establishing shots were used to show the change of setting. But of course England is very much a real country!)

I enjoyed Season 6 to the point where I am now going to seek out the first five seasons so I can watch them in order. I look forward to discovering them! Everyone needs a little escapism now and then, and this is a very pleasant way to experience it.

In a Mars base the inhabitants are being infected by a mysterious water creature which takes over its victims. The Doctor is thrust into the middle of this catastrophe knowing a larger one is waiting around the corner.