« The Fall: Season One review 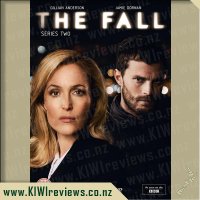 The Fall, a UK BBC crime drama TV series on DVD, starring Gillian Anderson as a Metropolitan Police detective drafted to Belfast to help on a puzzling murder case. Though her superiors aren't convinced, Stella Gibson (Anderson)'s in­vestigations lead her to believe that a serial killer is at work.

Gillian Anderson and Jamie Dornan reprise their roles as DSI Stella Gibson and Paul Spector in the second series of The Fall. Picking up where series one left off, Gibson continues her hunt for the killer who hides in plain sight.

I had just finished watching Season One when I saw that Season Two was following soon not after so I quickly set it to record, though due to my husband wanting to watch it with me and being more than a little addicted to his Xbox games, I've only just managed to finally finish this second season and I can't wait to see a third season should they go ahead with their hopes to. This follows on right from the events of the previous season and delves more into Specter and what he is doing, but also lets us know what happened to a former patient of his who lost her son and gives us more of an idea on Stella.

This one isn't a nail biting as the previous and I did find the bits with Rose and Specter to be more than a little annoying and Rose's video recording didn't stir anything in me except for a desire for her to hurry up and shut up. I felt sorry for his family and everything that he is putting them through, but was fed up with Katie, she just got on my nerves after the first couple of episodes. The acting in this is really well done and all are believable, but it did lag in a few spots.

I did enjoy this and would be interested in another season, I'm curious to see where everyone goes from here.

After watching the first series and being absolutely hooked I could not wait for the second one to finally reach our shores.

Although, it does not have the same intensity and the same story line it is still good. I did find it lagged a bit and lost interest for a couple of minutes here and there and by the end I honestly just wanted to have it finish. I was pumped though when they finally closed in on him and Stella could finally have her show down with Paul. It was infuriating how it went down and really you just wanted to smack Paul and just get him to tell the truth oh and do not get me started on the school girl crush, seriously she made my skin crawl everytime she was on screen. It was a tad predictable in places and obvious what was going to happen at the very end, but having said all this I still did enjoy it. Although the dudes ego has got to come down a peg or two.

Saying all this I am interested to see if they make a third. To find out what happens with Stella and Paul. You can feel the sexual intensity between the two and when she ran to him, instead of her 'man' it was proven my suspision that love was in the air was not too far from the truth. A great series even if this just didn't have that same fire.

Angelina Ballerina tells the timeless tales of a remarkable mouse who dreams of becoming a prima ballerina.

Headstrong, passionate and feisty, she is a character children of all ages will relate to.