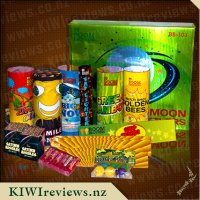 It's a sad fact that with the items that are the most fun, are also the ones the idiots make into the most dangerous. For years as a kid I was quite safe with a box of matches and handful of tom thumbs, double happies and sky rockets. And when we ran out of rockets, we made our own using the recycled sticks, some cellotape and a double happy per stick. We used old pipes to make launching tubes so that we could aim the rockets away from people or houses, and we had lots of safe fun. But, naturally, the rotters did stupid, dangerous and even downright cruel things with them, and so they all got banned. Now, we get fountains, roman candles if we're lucky, and a lot of sparklers.

And yes, that's what this $50 pack is filled with... with a few interesting gems buried in amongst the mix. Prime examples are the Magic Whips. These are paper ribbons filled with god-knows-what, but when you hang one from a fence or tree and light the fuse, you get the same sound effects as you used to get from lighting off a string of tom thumbs! -crack crack crack- It brought back some old memories, and I loved them.

The Smoke Balls, while less interesting, can be used to enhance the effects of some of the other crackers. I found that using a small cable-tie to bind the fuses of a couple of these to the fuse of a fountain created a nice haze in the air so that when the fountain went off the smoke threw the light around more, giving it a smoother, but apparently bigger, light-field. This meant that relatively small fountains - ones smaller than anything found in this box - could appear more pleasing to look at.

The rest of the pack didn't really hold much in the way of surprises, but there were also no duds in there either. I let these off down the back yard with my kids sitting on the back porch oohing and ahhing away like mad. They were happy, and that's the important bit really - Guy Fawkes night is mostly for the kids in my house - I find fireworks pretty so-so compared to my youth, and my partner has absolutely no interest in loud explosions of sound and light.

Overall, while this will, quite literally, be $50 up in smoke... it's better value than many similarly priced packs you'll find around, and in many cases is better value than packs $10-$20 dearer, with fancier names and wrappings... chances are they were all made by the same factory in China too.

Our hero, the charming but condemned arch-swindler Moist von Lipwig found himself with a noose around his neck and dropping through a trapdoor into... a government job? By all rights, Moist should be meeting his maker rather than being offered a position as Postmaster by Lord Vetinari, supreme ruler ... more...