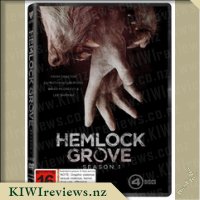 The series is set in the town of Hemlock Grove, Pennsylvania. The town is a mixture of extreme wealth and poverty, as the closing of the town's steel mill many years earlier caused many to lose their jobs. The town's main sources of employment are now the Godfrey Institute for Biomedical Technologies and Hemlock Acres Hospital.

I saw ads for this when we had Sky TV but for some reason or another I forgot about it and forgot to set it to record, despite being interested and wanting to watch it, so when there was a chance to review it I took it as the perfect opportunity to try and see if I could get it on DVD. Hemlock Grove takes place in a small town, where the Godfrey's rule the roost, the generic rich but disliked family. Then there's the gypsy mum and dad who move into town, the brother in law who hates his sister in law but refuses to back out of the business, the mystery pregnancy, cop like figure with a secret... aka. all the generic characters that you could expect.

Having watched the season I can easily now say that I have not gotten used to the way that they filmed this series. The lighting feels slightly off, I'm not sure what kind of effect they were going for but for me it didn't work and if I wasn't reviewing it I may have given up on the show based on that alone, as well as the blood and gore looking very fake and some very obvious green screen moments with the background. The next big thing would have to be the plot, for something that classed itself as horror thriller, there wasn't any horror and not many thrills, though I will concede that the very first scene had me looking away (only due to one little moment that always grosses me out). Some of the lines felt stilted and not very well written, again, something that would give me cause to usually turn a show off.

The special effects, as above, aren't that great. There were scenes with vomit, where it was easy to see what they used to make it with, the blood looked too thin etc. But I must say that I thought that the werewolf transformation scene was well done, very gory, but an interesting take on it and decently done. I will admit that having watched the whole season, I am curious to see where things go and if we get any decent answers to the questions raised but had I watched this when it was on TV... I would have quickly given up on it.

The seven-disc Complete Epic Series Box Set features all 24 x 45min episodes of the original series and is loaded with over 3.5 hours of newly produced and never-before-seen bonus features. The entire series has been re-mastered from original source materials for optimal picture and sound quality. It features both a newly created 5.1 Dolby Digital surround track and the original monotrack.